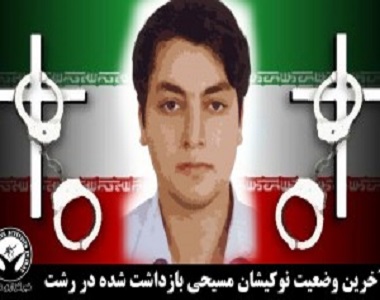 HRANA News Agency – Two Christian from Rasht with the names of Yasser Mosayebzadeh and Sayeb Fadaee were released on the bail of 1 billion IRR. Though Mohammed Vafadar another arrested Christian remains under detention.
According to the report of Human Rights Activists News Agency in Iran (HRANA), in a ceremony on 14th May, reverent Yousef Nadarkhani along with his wife, Fatemeh Pasandideh (Tina) and 3 other Christians were arrested in a raid by the Ministry of Intelligence agents to a church in Rasht city. END_OF_DOCUMENT_TOKEN_TO_BE_REPLACED