On Tuesday, July 5, 2022, at least ten protests and two labour strikes took place in Iran. Read our review below for details, photos, and videos from these demonstrations:

A number of medical interns of the Yazd Shahid Sadoughi University of Medical Sciences gathered on campus to demand unpaid Covid bonuses, internship wages and amenities Improvements for interns. 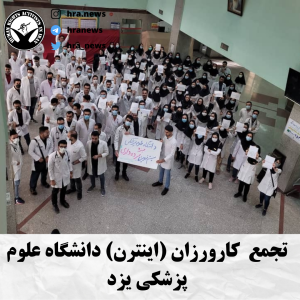 A number of workers of the Sungun copper mine located in Varzaqan county, East Azarbaijan went on strike and assembled at their workplace in protest against the arrest of two workers and other labour issues.

On Tuesday, July 5, two mining workers identified as Valiollah Mahmoodi and Arshad Kazempour were arrested by security forces and transferred to an unidentified location. For several months, the workers of this mining company have been protesting for their demands such as the implementation of the Job Classification plan. 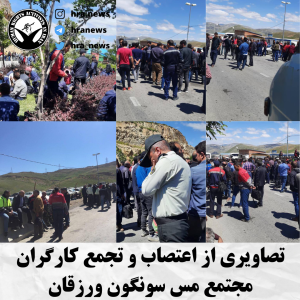 A group of personnel of the Ministry of Agriculture Jihad protested in front of the Planning and Budget Organization in Tehran. According to the protestors, their wages are disproportionately lower than other government employees. This protest led to the arrest of several protestors by security forces.

The personnel of the Ilam Tele-communication Company went on strike and gathered at company premises. They protested against the company’s new recruitment policy, whereby an applicant with more than thirty years of work experience will not be prioritized anymore. 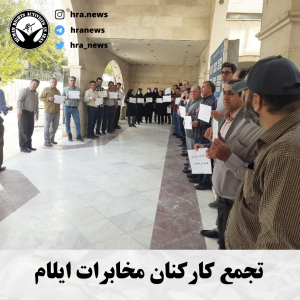 A group of workers on the Shafarud Dam in Rezvanshahr gathered in front of the Governor’s office to demand their seven-month unpaid wages.
In Kermanshah, the pensioners of the Social Security Organization gathered before the Pension Fund office and then demonstrated in the streets. Similar protests took place in Bandar Abbas, Dorud and Mazandaran Province. 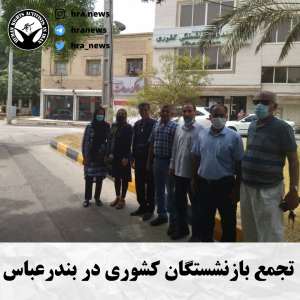 A number of members of the housing cooperation of the Zanjan University of Medical Sciences held a protest in front of the Ministry of Labour in Zanjan to protest against the member board’s violation of the regulation.