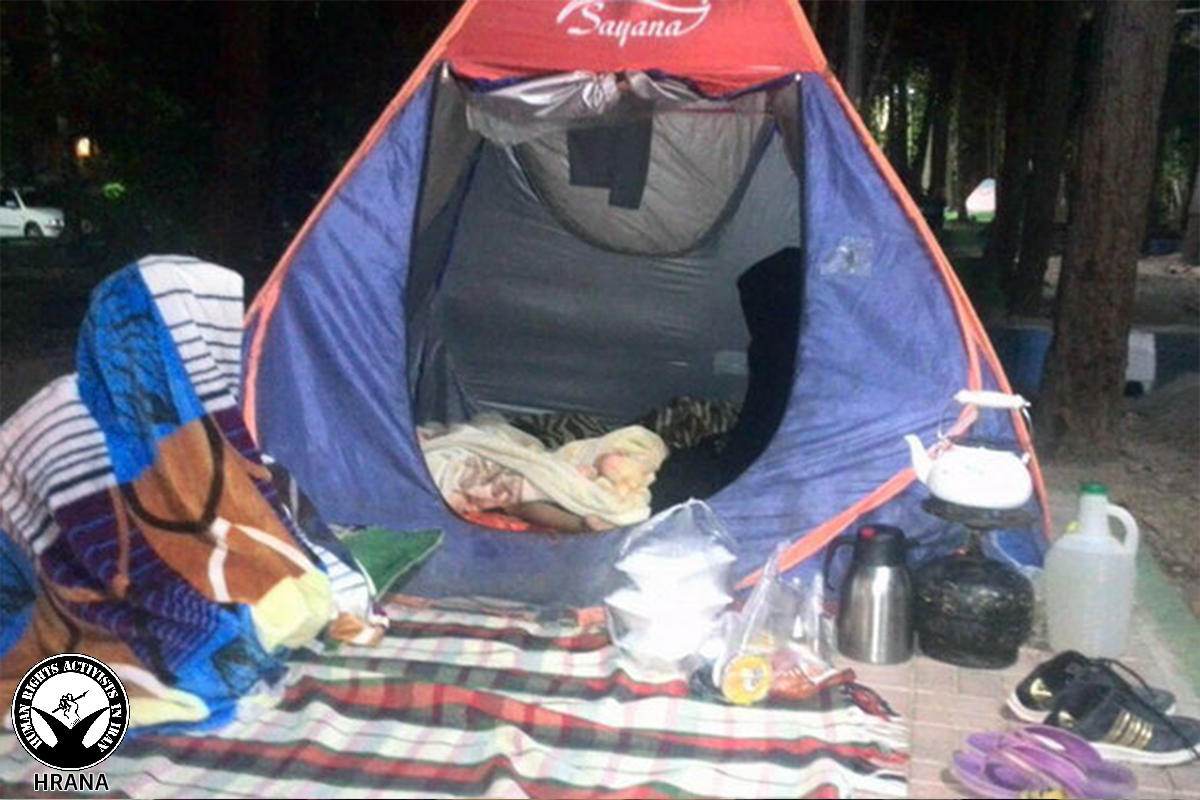 Human Rights Activist News Agency (HRANA)- Aside the commotion of families excitedly prepping their children for the back-to-school season, homeless daughters carry a burden of shame for their families. From parks across the city where they’ve taken up residence, many displaced parents anguish over whether school will even be an option for their children this year.

In order to attend school, nine-year-old Nazanin will have to cease the freelance fortune-telling that has bolstered the income of her family since four months ago, when they first took up residence in Tehran’s public Laleh Park.

Stressed over transport costs for her daughter’s school — which is located far from the park, near the family’s former home — Nazanin’s mother shared the bitter memory of a retired man who, happy that his daughter did not want a master’s degree, celebrated the end of her studies. “We can’t even afford Nazanin’s transportation cost,” she said, “but we will send her to school even if it means carrying her on our backs […] We want her to remain in that school.” Though Nazanin’s elementary school has waived her enrollment fees, her mother dreads registering Nazanin in another institution that may not be so forgiving.

For her part, Nazanin dresses like a boy and continues to aspire to be a schoolteacher. When asked what she wishes for, she said, “I wish we had a house so I could go to school.”

Nazanin’s mother is tearful throughout her interview as she recalls the chain of events that lost them their apartment. First, despite 17 years of tenure at the Water Management office, Nazanin’s father was suspended from work without pay. “We had a home, […]” she said, “but when his salary was cut and we were late in paying rent, by just a few days, our landlord seized our furniture and put on the street with a few blankets and pillows.”

Homeless families and their children have taken up residence in parks all across the capital city. While I was interviewing in one of them, another young fortune teller — a 12-year-old who also sells chewing gum — drew close to my cell phone so that her story would be on the record, too.

Declining to have her picture taken, she said she hoped authorities would be moved to act on behalf of her struggling family. After moving to Tehran 5 months ago from Iranshahr in Sistan and Baluchistan province to seek treatment for her father’s neurological condition and her mother’s eye problems, she took to selling fortunes all day to supplement her family’s income. One of five children aged 6 months, 6, 12, 13, and 15, she works to fund her brothers’ educations, her parents’ medical treatments, and food for the family. She wants to go to school, she said; come winter, she could stay warm in the classroom.

According to Article 73 of the Charter on Citizens’ Rights, ratified by Hassan Rouhani’s administration and published on http://president.ir/en, “Citizens have the right to take benefit of a safe house suitable to meet their own and their family’s requirements. The Government will pave grounds for the realization of this right by observing priorities and by taking into account the resources.”

Some families are still waiting for the promises of Article 73 to materialize. The inflamed skin of Nazanin’s family members is suspect for skin conditions, but they attribute the discoloration to the insects in the park. They sleep in the pergola, where foxes pass by at night; they bathe in the public bathrooms, where hygiene conditions are out of their control.

The vulnerability of a life exposed to the elements makes it difficult for the family to explore other avenues of income. “We bought a brazier to sell grilled corn, but while we were sleeping, someone stole it. We wanted to sell tea, but someone stole our flask. Even our cell phones have been stolen multiple times[…]Even during Muharram, we were embarrassed to take food offerings. Now that Nazanin is starting school again, she can’t sell fortunes anymore, and I don’t know what we’re going to do!”

Red in the eyes and face, Nazanin’s father gets up and walks away without saying a word, saving what dignity he has left.

Touching a metal necklace around her neck, Nazanin fills the silence. “If someone would buy it, I’d sell this too. I am embarrassed to sell fortunes and things like that. I only do it for my mother.”

Nazanin has developed an aggressive nervous condition from her long-term exposure to the coarse walks of life that wander the park.

“She comes and tells me, ‘so-and-so said these words to me,’ then laughs and asks me what they mean,” her mother said, adding that she has lost the ability to provide structure and discipline to her increasingly agitated daughter. “She doesn’t know what these vulgar terms mean, but she is slowly learning them.” Pained tears stopped her from telling me more.

Nazanin’s voice offers up another memory. “One time, a man and a woman took me from my parents to a place with a sign above the door that said ‘Social Security Organization.’ People there were turning in children for 300 thousand tomans [approximately $100 USD] […]I ran away from them […] I ran so much that for two days, I was shivering and asleep. I don’t want to be separated from my parents.”

Nazanin’s mother seemed tormented by grief over the joys of childhood that, since her arrival in Luleh, evade the young girl in her care. “When Nazanin comes back from school, wouldn’t she want to rest? Wouldn’t she want to be indoors, somewhere warm and cozy? Wouldn’t she want clean and ironed clothes, a bathroom to shower in? Where is she going to do her homework?…”