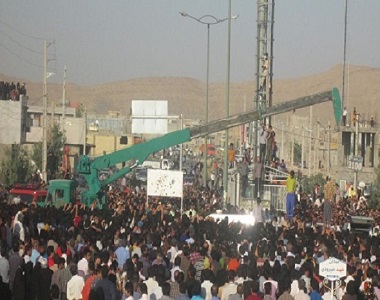 HRANA News Agency – Three young men has been hanged by crane in the central square of Dehdasht on charge of rapping.

According to the report of Human Rights Activists News Agency (HRANA), Hussein Khodadadi, Sadegh Sal Afrouz, Mehdi Abbasi Zade and Bahram Husseinian had been tried in one dossier and one of them is still in the Yasuj prison.

The eye witnesses told HRANA that lots of people including children were watching the execution of these prisoners.

According to the reports of the regional sources the complainant family had gone to the judiciary to declare their consent but the judiciary authorities have told they will hang the prisoners anyway.