I Will Do Nothing for Jafar Azimzadeh, Even if He Dies: Tehran’s Prosecutor 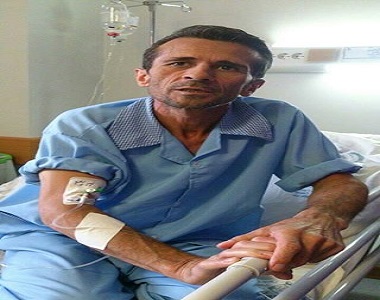 HRANA News Agency – Abbas Jafari Dowlatabadi, Tehran’s prosecutor after accepting to meet the wife of Jafar Azimzadeh, secretary of the board of the Free Trade Union of Workers in Iran imprisoned at Evin Prison on 59th day of hunger strike, told her that he would do nothing for her husband even if he dies, yesterday.

According to the report of Human Rights Activists News Agency in Iran (HRANA), Jafar Azimzadeh, imprisoned labor activist at ward 8 of Evin prison has been recently kept at Sina Hospital in Tehran following the deterioration of his health condition. He is on the 60th day of hunger strike protesting “suppression labour and teacher activists through security charges”.

“Mr. Azimzadeh’s wife went to meet Mr. Jafari Dowlatabadi to follow the case of her husband and his demands. But Mr. Dowlatabadi told her with anger that he would do nothing for him, even if he would die. He is responsible for it and it’s no one’s business.” A source close to Jafar Azimzadeh told HRANA, yesterday.

The labor activist was one of coordinators of scroll of the petition signed by forty thousand workers to increase the basic income. He has been sentenced to six years in total on charges of gathering and colluding with intention of acting against the national security, disturbing public order and propaganda against the regime.

Azimzadeh’s charges were formation of the Free Union of Iranian Workers, formation of the National Union of Dismissed and Unemployed Workers in cooperation with the Committee of Labor Unions, gathering in Laleh Park in 2009 at the International Workers’ Day, guiding the labors in a protest in 2005, constituting, planning and management of workers’ protests in 2014.

On November 8, 2015 he was summoned to Evin Prison to serve his sentence.