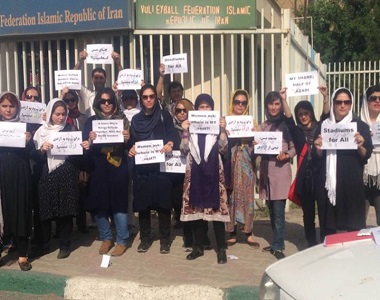 HRANA News Agency – After 58 days one of the women who attended the gathering to support women’s attendance in Azadi Stadium to watch volleyball tournament is still in detention.

According to the report of Human Rights Activists News Agency (HRANA), on June 20th, a group of Iranian women and girls gathered at south western entrance gate of Azadi Stadium to support women’s attendance to watch volleyball matches in this Stadium which faced the violence of police.

In this gathering, 15 women protesters were arrested by security forces and were transferred to Vozara detention center. Later that afternoon, most of them were released after signing a pledge.
One of the participants (Gh.Q) is still in detention for over 58 days.