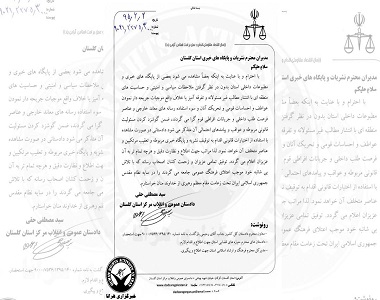 HRANA News Agency – Attorney general of Golesatan province warned editors of news and social websites about “discriminatory and irresponsible” context and emphasized that if such case is being identified, these media will be banned and they will face the consequences.
According to the report of Human Rights Activists News Agency (HRANA), Seyed Mostafa Haghi, general attorney of common and revolutionary court of Golestan province warned editors of social and news websites about publicizing or publishing “discriminatory and irresponsible” context.
In this warning that has carbon copied to deputy of general attorney of judiciary, judiciary prosecutor, and social and cultural ministry office of the province, Mr. Haghi emphasized that these websites will be banned and their editors will face the consequences.
An image from this warning: