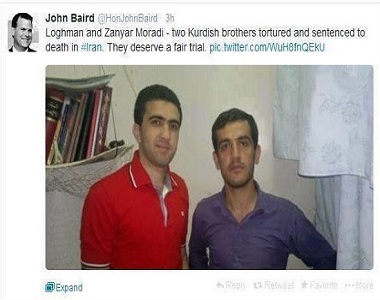 HRANA News Agency – Zanyar Moradi is summoned to court and has been asked about having appointed attorney or public defender.

According to the report of Human Rights Activists News Agency (HRANA), Zanyar Moradi was summoned to branch 74 of criminal court of Fars province and questioned about his intend about having appointed attorney or public defender, on Wednesday February 5.

Need to be mentioned, Loghman Moradi was summoned to branch 74 of criminal court as well and was beaten during the transfer.

The next day Loghman Moradi was transferred to the hospital due to his internal bleeding being resulted from being beaten. He is still suffering from the injuries caused by the beating of the prison guards.