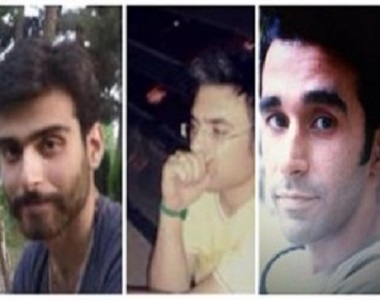 HRANA News Agency – Omid Alishenas, Aso Rostami and Ali Nuri have been sentenced to 24 years of imprisonment.
According to the report of Human Rights Activists News Agency in Iran (HRANA), a verdict issued by the Revolutionary Court on May 30th have sentenced Omid Alishenas to 10 years and each of Aso Rostami and Ali Nuri to 7 years of imprisonment. It has been said that these sentenced are going to be reduced by the court of appeal according to article 134 of the Penal Code.
Atena Daemi and Mohammad Said Hosseinzade, 2 other civil activists had also been already sentenced to 14 and 7 years in prison.
Omid Alishenas was arrested on September 4, 2014 on the charges of propaganda against the regime, collusion against the national security and insulting the Supreme Leader and transferred to section 2-A of IRGC in Evin prison. Although a bail of 100 million Thomans have been issued for him but the court rejects to release him and branch 28 of the Revolutionary Court of Tehran, presided by Judge Mogheise sentenced him to 10 years in prison.
Aso Rostami was arrested on October 4, 2014 after gathering in front of the office of UN in Tehran in support of Kobani with the same charges and is kept now in section 8 of Evin prison in Tehran. He has been sentenced to 7 years in prison.
Ali Nuri was also arrested at the same day as Aso Rostami and has been transferred to section 8 of Evin prison after a long time of solitary confinement in ward 2-A of IRGC. He has been released on the bail of 50 million Thomans and sentenced to 7 years in prison.