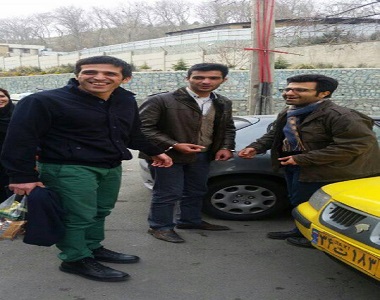 HRANA News Agency – 3 of Mohammad-Ali Taheri’s supporters were transferred to Tehran Central Prison (Fashafouye). Vahid Fallahi, Mohsen Karimi and Farshad Azimzade had been arrested in front of Evin Prison on Sunday 21st February.
According to the report of Human Rights Activists News Agency (HRANA), the mentioned citizens while gathering along with some of other supporters of “Erfane-e Halghe” to follow up Mohammad-Ali Taheri’s situation had been arrested in front of the Evin Prison.
Allegedly, Mohammad-Ali Taheri, the founder of “Erfan-e Halghe”, is not in good conditions due to the long hunger strike and has not contacted his family since last week.
3 of the arrestees were first taken to Velenjak Police station and later on Monday at the Evin Court, the Charge of “Disturbing the Public Order” was disclosed to them and then they were transferred to Fashafouye Prison.
The Prosecutor of Evin has assigned bails for these arrestees, and by providing the proposed bail they will be released.