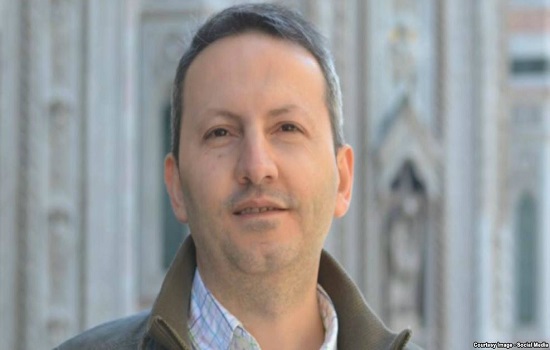 RANA News Agency – Ahmad Reza Jalali, a researcher and medical doctor and a former resident of Sweden who has been held in detention on security charges, since May 2016, was recently transferred from ward 209 to ward 240 of Evin Prison after announcing a hunger strike. The family of this Iranian-Swedish citizen has no information about him and is concerned about his fate.
According to the report of Human Rights Activists News Agency in Iran (HRANA), family members of Ahmad Reza Jalali are in fear and not knowing this prisoner’s situation.
Vida Mehran Nia, Mr. Jalali’s wife told HRANA: “since three weeks ago, he has not been allowed to make phone calls abroad, and from one week ago, he has had no phone calls with his family and we are quite concerned about his fate.”
Mrs Mehran Nia continued: “The last time he called us, he said that he had lost about 25 kg, and his weight had become 56 kg. After that it has been three week that we have had no contacts.  His lawyer is not accepted and has been threatened.”
Mr. Jalali has gone on hunger strike again, because “his lawyers have not been accepted and have been threatened by Judge Abulghasem Salavati”, since Wednesday, February 15, 2017.
Ahmad Reza Jalali is a professor and researcher of Emergency Disaster Management and a citizen of Sweden. He has got his PhD in the field of crisis management at the University of Piedmont Italy, and used to live in Sweden with his wife and two children. Mr. Jalali, after a visit to Iran to attend an academic conference was arrested by the Intelligence agents and was sent to Evin prison. Mr. Jalali was transferred to ward 7 of Evin prison after seven months of interrogation in solitary confinement in ward 209. He was accused of collaborating with enemy states.
Also, in another strange action, judge Salvati, after reading the indictment to Ahmad Jalali, on January31, said his verdict would be a “death sentence”, and on the day of the trial “which will be held in a few weeks” there will be “no changes in this sentence”. In fact the judge of Branch 15 of the revolutionary Court had made his decision during the reading of the indictment before the court hearing.
Ahmad Reza Jalali had already visited Iran and participated in scientific and specialized seminars and workshops many times and never had any problem.