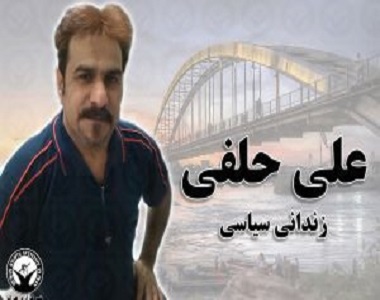 HRANA News Agency – Ali Halafi, Arab citizen from Hamidieh in Khuzestan province, is now held in Masjed Soleiman prison after serving 12 years of imprisonment. The prisoner has been deprived of having furlough and medical treatment during the long years of imprisonment.
According to the report of Human Rights Activists News Agency (HRANA), following a series of explosions and bombings in Ahwaz in 2005, a number of Arab citizens of this city were detained. One of the detainees was Ali Halafi.
Ali Halafi, son of Abdul Nabi, born in 1966, who is more than 50 years old, was not among the main defendants of the case, but was sentenced to 30 years imprisonment in exile.
His breasts were fractured during his arrest while he was suffering from gastrointestinal problems and was inevitably operated once in the years of imprisonment.
Mr. Halafi was kept in exile in Karun prison in Ahwaz for one year and Gonabad prison in Khorasan Razavi Province for 10 years and now, it has been one year that he is being kept in Masjed Soleiman Prison in Khuzestan Province.
The prison and judicial authorities have not agreed with any of his requests for medical furlough while Mr. Halafi has served about half of his imprisonment and needs more advanced medical services.
A close friend of the prisoner verified this report and told HARANA’s Reporter, “Ali has four children, including three girls and one boy. We have requested the furlough based on his medical situation and even his request was accepted at a stage and we delivered the bail and custodial documents to the court, however, it was stopped.”
Mr. HalAfi was arrested in a case known as the “explosion in Salman-e- Farsi Street in Ahwaz” by security forces in 2005. He was not the main defendant of the case, but was sentenced to 30 years in exile by Branch 2 of Ahwaz Revolutionary Court on the charge of “Moharebeh”. The verdict was just confirmed by the appeals court.