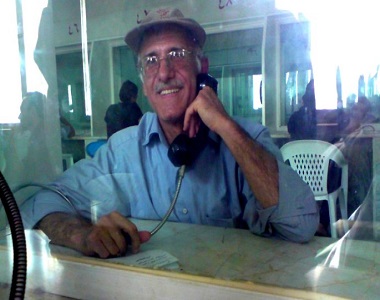 HRANA News Agency – Ali Moezzi, ill political prisoner who should have been released on May 22 by the end of his sentence, faces another lawsuit on charge of propaganda against the regime for the second time. This prisoner has been transferred to Tehran prison after this case was opened for him.
According to the report of Human Rights Activists News Agency in Iran (HRANA), Ali Moezzi, political prisoner who should have been released on May 22nd by the end of his sentence, has been transferred to ward number 2 of Tehran prison. Due to his refusal of using handcuffs and shackles, his court sessions have not been held during past weeks.
Ali Moezzi faces a new case that is being processed in branch number 24 of the revolutionary court of Tehran.
According to an informed source, “propaganda against the regime is one of the charges of Mr. Moezzi and there is no information regarding the rest of the allegations against him”.
Need to be mentioned, this is the second time that this political prisoner faces new charged and is not being released after end of his sentence.
HRANA has previously reported that following the protest regarding prison condition, this prisoner was transferred to Rajaei Shahr prison as a punishment. In December 2016, he was transferred from visiting hall to ward 209 of Evin prison. Mr. Moezzi is being held in ward number 2 of Tehran prison, despite suffering from constant intestine bleeding.
Ali Moezzi is suffering from prostate, bladder cancer, and kidney diseases, and has been deprived of having furlough and proper medical treatments, during imprisonment period.
Need to be mentioned, Ali Moezzi, was charged with propaganda against the regime in 2015. He was summoned to branch number 28 of the revolutionary court last December and sentenced to one year in prison by judge Moghiseh. He was deprived of having a lawyer. He had previously been charged and received sentence for the same reason in Karaj court.
Mr. Moezzi who had been imprisoned during 1980s, was arrested in autumn 2007 and sentenced to two years and conditional 3 years in prison. He was released after two years from Rajaei Shahr prison, and was again imprisoned in June 2011.