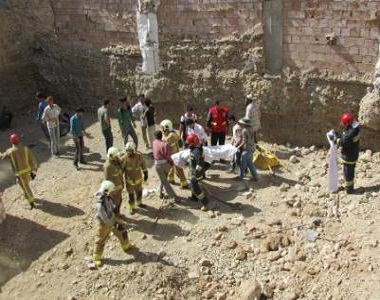 HRANA News Agency – The speaker of the Tehran Fire station confirmed the death of one Afghani worker because of a building collapse.

Seyyed Jalal Maleki told to ISNA: “At 7:27 p.m. yesterday the Tehran central fire station was informed of a building collapse and the Firemen from the station 31 and rescue group 12 were sent to Damavand street, Nabiiyan street.

The speaker of the Tehran fire station said: The firemen saw a dug place with the depth of almost 5 meters and area of 200sqm where a worker was blocked under the collapsed parts when they arrived to the reported address.

The firemen brought out a 26 years old Afghani worker after a while and transferred him to hospital but he was already dead.

The rescue operation was finished at 9:07 p.m.