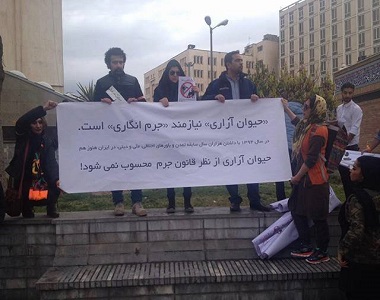 HRANA News Agency – A group of citizens gathered in front of Parliament in protest to the lack of proper laws to protect animals. The aggregation ended by police intervention, acts of violence, throwing tear gas and detention of a number of protesters.
According to the sources of Human Rights Activists News Agency in Iran (HRANA), the number of detainees are 20 and their whereabouts is not known yet.
One of the participants said the aggregation was quite quiet even the slogans have not been heard. The security forces proceeded to beat and tear down the placards of the protesters by attacking to the participants.
During the last days the publication of a video which shows a dog being beaten brutally has sparked the protests.
Although the man who abused the dog was arrested on charges of “committing an unlawful act in public” but animal rights advocates say Iranian criminal law is incomplete about animal protection and animal abuse is not considered a crime yet.


Source of video: “my protest movement and 74 lashes”