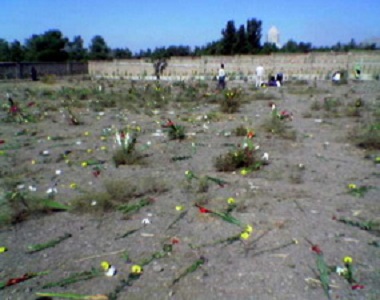 According to the social networks and Jaras, the agents prevented the families of executed prisoners of 1988 to enter Khavaran cemetery, however, the number of security agents were less compared with the past years.

Jafar Behkish one of executed family members wrote on his Facebook wall that such as the past years the security agents called or summoned the families of the executed prisoner.

The families of executed prisoners of 1988 decided in 1989 to held the anniversary every year on September 1 by gathering in Kahavaran cemetery but every year they were faced limitations and prevention.

As well mother of one of the executed prisoners of 1988 Anoushiravan Lotfi, expressed her condolence in a short message and said “You kept our dears for 25 years without any name, title or tombstone and covered by sand and brushwood.”

She expressed herself as hopefully one day there will be a garden full of flower and wrote “Yes, it was 25 years ago, how fast passed, but what we the families gone through, only we know and no one else could understand.”