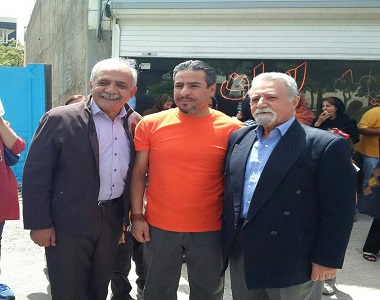 According to the report of Human Rights Activists News Agency (HRANA), they were arrested in late May, 2011, when premises and homes relating to the Institute for Higher Education were raided by security forces. In October, 2011, they were sentenced to four years in prison.

Noushin Khadem, another BIHE educator, was released on April 22. She had also served a four-year sentence, but without receiving any prison furlough. Amanullah Mostaqim, who was sentenced to five years in prison, is free on medical furlough. Sadaf Thabetayan, arrested in 2011, was given a two-year sentence, and freed in the Ramadan amnesty of August, 2012.

The BIHE is a distance-learning institute which serves students who are excluded from tertiary study in Iran, because they are Bahais. Among the other educators arrested for their work with the BIHE is Riaz Sobhani, who was arrested in June 2011: he was also sentenced to 4 years in prison, so his release may be expected in the next few weeks.

Faran Hessami and her husband Kamran Rahimiyan are also serving four-year sentences for educational activities, in Raja’i Shahr prison, but they were not arrested until September 2011.

Hasan Momtazi  is serving a 5-year sentence. Azizollah Samandari is serving a five-year sentence, which he began on July 7, 2012. He was sentenced in October 2011 after a 10-minute trial, in which the only question he was asked was whether he belonged to the Bahai community. This list of nine BIHE educators still in prison may not be complete.