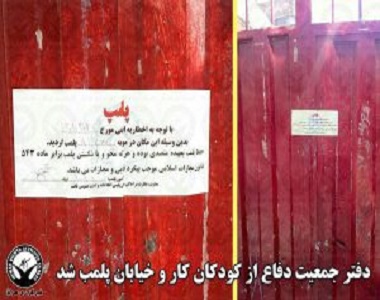 HRANA News Agency – The office of Association to Defend the Street and Working Children, which is located in Nemat Abad in Tehran was sealed. This NGO had made extensive efforts in support and help of street and working children, including public education.

According to the report of Human Rights Activists News Agency (HRANA), a group of people who introduced themselves as representatives of interior ministry and municipality sealed the office.

They claimed that this NGO needed to stop its activities due to the failure in extending the permission of work.

This association was one of the few independent NGO’s that has a great role in defending the rights of children by public education and also stopping child labour during past decade.

According to this organization’s officials, the main goal of this society was to eliminate the child labour, and any other types of exploitation of children, and defending the rights of all children.

The Association to Defend the Street and Working Children
Children