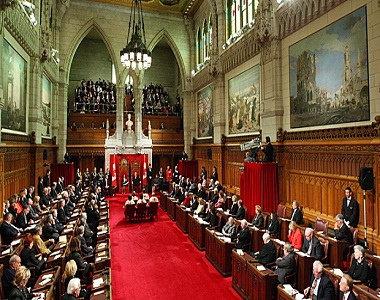 Linda Frum, Senator from Ontario at the meeting said: “Since last research panel in 2013 till now in 2016, three years has passed and the human rights situation in Iran has worsened. The status of political opposition, LGBT, bloggers and journalists, and religious minorities has worsened with the use of torture and improper conduct. In these three years, 2141 people were executed in Iran with judicial decisions, which was the worst in the world.”

She also spoke about the Iranian-Canadian citizen, Saeid Malakpour, prisoner in Iranian prisons, and urged the Iranian authorities to release him so that he can return to Canada.

Senator Daniel Lang from Yukon in his speech spoke about Amir Amirgholi and explained the activities, charges and his heavy sentence of more than twenty years imprisonment and urged other Senators to join him to ask Iranian government to release him.

Senator James Cowan of Nova Scotia and leader of Liberal Senators spoke about the high rate of executions in 2015 and also about political prisoners on death row. He personally mentioned Habib Latifi, Mohsen Daneshour and Saman Naseem and explained their situations one by one. He stressed that these prisoners had been living a few years in the shadow of death.

Senator Salma Attaullah Jan, from Trento, at this meeting spoke about the imprisoned students and as an example mentioned the blogger Sakhi Rigi, a student of computer software as well as other student; Misaq Yazdanejad.

Senator Raynell Andreychuk, of Saskatchewan, raised the cases of Kurdish imprisoned journalists; Mohammad Sediq Kaboudvand, Kamal Sharifi and Adnan Hassanpour, in her speech. She also highlighted the bottom ranked of press freedom report and the oppressed situation of Baha’is in Iran.

Ontario’s Senator, Lynn Beyak spoke about Nahid Gorgi, an ordinary Iranian mother who has been arrested, detained and suppressed because of her activities in social networks. She also urged other senators to demand her release from the Iranian authorities.

Senator Joan Fraser, from Quebec, and deputy leader of the Liberal Senators, spoke about Maryam Akbari Monfared, her case and the judicial proceedings and her imprisonment and demanded immediate release of this political prisoner.

Senator Stephen Greene, from Halifax, spoke about Baloch political prisoner, Mohammad Saber Malek Raisi, who was 15 years old at the time of arrest and at the end of his speech, said “Iran, release Mohammad now”.

At this meeting, Mr. Payam Akhavan, Professor of International Law at McGill University and Mr. Ahmed Shaheed, UN Special Rapporteur on the situation of human rights in Iran, separately gave speeches through the video conferences, each in ten minutes. After that these two guests answered the Canadian Senators various questions about the drug offenses defendants’ execution, the situation of women, censorship and how to use the political relationship with the Iranian government in regard to human rights violations in this country, along with many other issues, in detail.