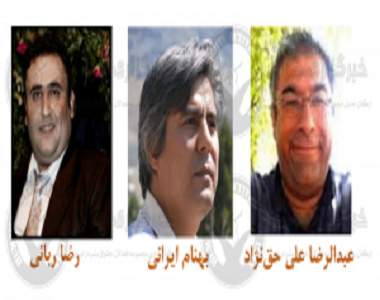 HRANA News Agency – At least two newly converted Christian prisoners were accused with “Enmity against God and state” and “spreading corruption on Earth” which can result in death penalty if it is proved in the court. Also, another person was charged with “Propaganda against State”.

According to the report of Human Rights Activists News Agency (HRANA), during the last week, “Reza Rabani” and “Abdolreza Ali Haghnejad” – two newly converted Christian prisoners- were charged with “Enmity against God and State” and “spreading corruption on Earth” at Karaj Islamic Revolutionary Court. In addition, another converted Christian prisoner, “Behnam Irani”, was also charged with “Propaganda against State”.

According to their lawyer, charging these prisoners -who were active in the field, believes and religion-   with such offences are abnormal and senseless. He hoped that these allegations will be removed from the cases made for these citizens in the later stages of the trial.

Based on the existing Laws, “Corruption” defined both as an independent offence and occasionally as an offence connected with “Enmity against God”. The punishment for “Corruption” has defined clearly on occasions. However,  there are instances that the punishment is not clear and the law expresses that the “Corrupt “or the “Enemy of God” will be sentences to one of the followings : “Death Penalty”, “Hanging”, “Amputation of right arm followed by left leg” and “Exile” .