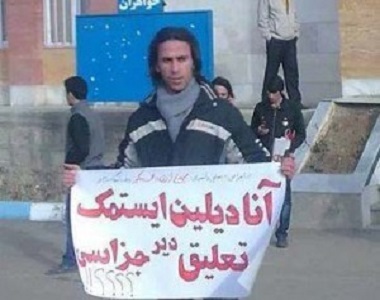 HRANA News Agency – Saeid Hosseini, civil rights activists, was arrested because of refusal to attend the court.
According to the report of Human Rights Activists News Agency (HRANA), on 11th December, at 10am, Saeed Hosseini was arrested in his workplace by the security police.
The reason of his arrest is his refusal to attend a court regarding his prior detention in 2013, around the International Mother Tongue Day in Parsabad city.
One of his relatives told HRANA’s reporter: “Chief Justice of Parsabad city of Moghan, Mr. Mozaffari Saeid Hosseini, sentenced him to 6 months imprisonment without any investigations and the verdict started immediately, and he was sent to prison in Meshkin shahr for serving his sentence.”
It is to say that, Saeid Hosseini also had been arrested this year in summer at the Savalan rally and was released on bail.