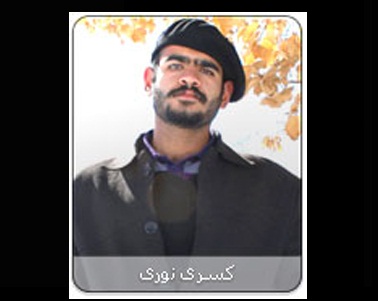 HRANA News Agency – Kasra Nouri the imprisoned Dervish is still on the hunger-strike in the Adel Abad prison of Shiraz.

According to this report, although Kasra was supposed to be transferred to the Shiraz revolutionary court the prison officials did not allow him. Due to this reports it seems the officials did not let Kasra to be transferred because they were afraid of the obvious signs of the critical health condition Kasra has, after 86 days of being on the hunger-strike. At the same time Gonabadi Dervishes of Shiraz gathered in solidarity with Kasra and wanted to visit him but faced with security forces and the gathering became riot. The clashing between the Dervishes and the security forces resulted to the arrest of four Dervishes – Amin Karami, Amir Nouri, Hashem Zahkhordi and Hamid Parhizgar – on charge of disarming governmental agents.

The Dervishes were arrested for four hours and were interrogated and beaten.

Kasra Nouri is of the Gonabadi Dervishes who started hunger-strike with Saleh Moradi since 84 days ago in protest to transferring the lawyers of the imprisoned Dervishes to the solitaire cells of the section 209 of the Evin prison.

These Dervishes are imprisoned in Adel Abad prison of Shiraz since 15 months ago on charges of propaganda against the regime, acting against the national security, the membership in the Majzooban group and interview with the enemy governments.