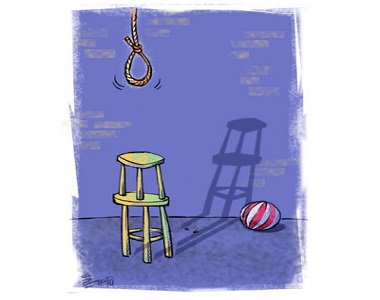 Subsequently, HRANA reported the news by identifying its source and the related details.  Our news agency also launched its own investigation to obtain more information surrounding the fate of the juvenile offender.

Upon further investigations, HRANA has learned that the juvenile offender’s name is Sabar Sharbati.  According to the court records, the defendant, born in 1990, was 16 years old when he committed the murder.  In July 2005, Sharbati killed a driver during a brawl with the victim.  The original death sentence was issued by Judge Hassan Tardast, presiding over the 74th Branch of the Penal Court.

In 2009, the head of the judiciary branch remanded the case to the 71st Branch of the Appeals Court because it was determined that the child lacked sufficient intellectual and brain development to understand the nature of his crime.  The appeals court subsequently confirmed the verdict, and the death sentence was eventually upheld by the Supreme Court.

The family of the victim has demanded approximately $500,000 in reparation before giving the required consent for the sentence to be commuted.  Iranian criminal law allows death penalty for children, but the sentence can be carried out only after the child reaches 18.  Sharbati is now being held in Rajai-Shahr Prison in Karaj, awaiting execution.