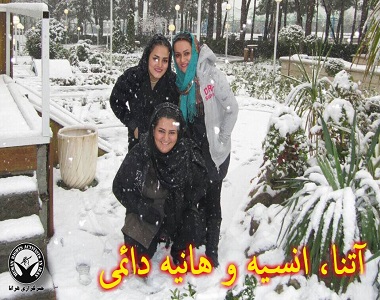 HRANA News Agency – Two sisters of Atena Daemi, imprisoned human rights defender, were acquitted of the accusations made by the Iranian Revolutionary Guards, based on a warrant issued recently by Shahid Moghadas Court, in Evin.

According to the report of Human Rights Activists News Agency in Iran (HRANA), Ensieh and Hanieh Daemi, two sisters of Atena Daemi, human rights defender who is imprisoned in women’s ward in Evin prison, were acquitted of the accusations made by the Revolutionary Guards, based on a warrant issued recently by Branch 4 of Shahid Moghadas Court in Evin.

According to the decree a dismissal of prosecution was issued for charges of “insulting the Supreme Leader, insulting and deliberate beating.”

A source close to Daemi family told HRANA’s reporter: “Atena’s sisters had not been charged with insulting the Supreme Leader but it has been mentioned in this dismissal of prosecution order.”

It should be noted, the trial of three members of Daemi family was held in Shahid Moghadas Court in Evin on January 23, 2017. Two sisters and one son in law attended the trial. According to the case’s investigators, the son in law was acquitted of the charges and Ensieh and Hanieh Daemi were released on the bail, after being informed of their charges.

In this session, a bail of 40o million IRR was issued for Ensieh and Haniyeh Daemi, after being formally charged with “insulting the authorities and preventing the execution of the warrant”, and Hossein Fatehi, the family’s son in law was acquitted of the accusation.

HRANA had reported earlier, in the wake of a new case against Atena Daemi, three of her family members, including her two sisters and brother in law were summoned to Shahid Moghadas Court, in Evin Prison, on December 27, 2016.