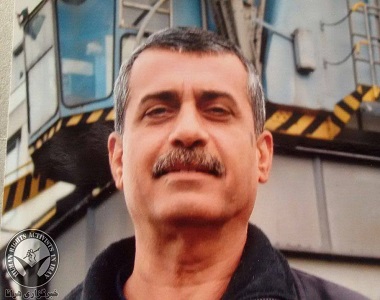 HRANA News Agency – Yousef Silavi has disappeared since November 8, 2009, few days after his arrival in Iran after visiting his daughters in Syria, and despite his family’s efforts there is no information about his faith. He was questioned in the Iranian embassy in Syria along with his daughter while he did not have any political activities. According to unofficial statements of the security authorities, he is a hostage in order to force his daughters Mona and Shima, who are helping in translation for Arab asylum seekers, to go back to Iran. But no security organization takes the responsibility of his arrest, neither do they issue a death certificate for him.
According to the report of Human Rights Activists News Agency (HRANA), Yousef Silavi, has disappeared since November 8, 2009 and his family’s efforts to find him have been unsuccessful.
Shima Silavi, his daughter, described the disappearance of his father in an interview with HRANA’s reporter, “On that times my older sister and I were studying in Syria and my father returned to Iran and my mother remained with us. One of his friends called us and said that our father did not open the door. He suspected that something had happened to him and broke the door and entered the house, but our father was not in the house. Nothing was stolen and the money and documents were untouched. His clothes were hanged and even his cup of tea was on the table”.
Ms. Silavi continued, “My mother went back to Iran and looked for him in every hospital, terminal, and mortuary in the city but there was no information about him and he had not left the city. No security organization has taken the responsibility of his arrest so far”.
She replied to a question about his father’s activities, “My father was not a political activist at all. He was an Arab activist among our relatives. However, my sister and I who were studying in Syria, were helping Arab asylum seekers with translation. They were registered in UN to go to a third country. My sister was more active than me and was summoned to the Iranian embassy many times, and had to offer bribes while being threatened and interrogated. When my father wanted to return to Iran my sister who went to embassy along with him, was questioned by embassy’s employees outside of the building”.
Ms. Silavi brought three points and said that “we are convinced that my father is arrested in order to force us to go back to Iran. But because he did not have any activities, his arrest is not registered in any organization like hundreds of other similar cases and no organization is taking the responsibility of his arrest”.
She described these three points as, “first, the friend of my father who informed us that he had disappeared was arrested by the security forces of the IRGC and threatened that if he would follow up he would be in trouble too. He stopped his contact with us after that. Second, one of the IRGC’s officials has told my mother unofficially that if she wanted to see her husband again, she should tell her daughters to go back to Iran. And the third point, one year from disappearance of my father, when my mother applied for retirement salary of my father who was an employee of Power Organization, to the insurance and pension organization, the employee of that organization told my mother that her husband was alive and they could not issue a death certificate”.
Shima Silavi emphasized at the end of the interview, “My father was not an activist and did not know the regulations. If he had made some noises like some activists, it would not be like this. We got trapped during Syria’s war and could not raise our voice, till we came to Europe and asked for help from international human rights organizations like Amnesty International to follow up our father’s case. I asked all of the families of the prisoners and missing to publicize conditions of their beloved one so that people know there are these types of victims and Islamic Republic of Iran has to be held responsible about them”.
Need to be mentioned, previously Amnesty International published a statement about Mr. Silavi and demanded immediate action about him and his faith.
The following video is made of the photos of this resident of Ahvaz from his childhood to the last days before his disappearance that has been prepared by her daughters Mona and Shima.