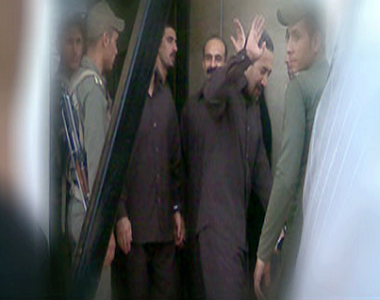 HRANA News Agency – On Wednesday morning four of imprisoned Gonabadi Dervishes in Adelabad prison of Shiraz were transferred to branch 1 of criminal court of Kowar in terms of their dossiers’ process.

According to the report of Majzoobane Noor website, Mohsen Esmaieli, Seyyed Ebrahim Bahrami, Mohammad Ali Sadeghi and Mohammad Ali Dehghan of the imprisoned dervishes in Adelabad prison of Shiaz were tried in branch 1 of criminal court of Kowar by judge Kashkooli in presence of Mr. harsini, Nazari and Sadeghi the lawyers.

These dervishes are accused to establishing terroristic groups against regime, attending the gatherings with intention of extermination, enmity against God and carrying illegal weapons.

It is worth mentioning the dervishes were transferred to the court with the high level security in handcuff and shackle. Meanwhile many dervishes of Shiraz were gathering in front of court building in solidarity with the imprisoned dervishes. Shahbazi and Ghaemi the two clerics who had key role in establishing Kowar clashes were present in the trial session.

These four dervishes were arrested on April 30, 2013 and were in detention center of Shiraz intelligence known as No.100 for one month under severe interrogations with torturing. Even the interrogators used dervishes’ personal photos with family members, insulting to their religious leaders and threatened them to execution to intimidate and get confession from them. These tough moments and mental harassment affected the health condition of the Gonabadi dervishes such as backache and nervous system problems.

In September of 2011 the fundamentalists gathered in front of dervishes of Kowar and chanted offensive slogans against dervishes that resulted clashes, killing a dervish with bullet and injuring tens of dervishes. Then the arresting wave against dervishes started and the pressures on dervishes intensely increased that in the second six months of 2011 and first six months of 2012 more than 100 dervishes of Kowar were arrested, beaten and tried. Nevertheless after more than almost two years the arrests continuing while despite of the continuous complaints of dervishes, none of the main offenders involved in establishment of the clashes have been arrested.

14 thoughts on “Four Gonabadi dervishes have been tried”