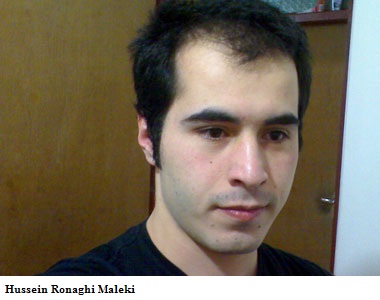 HRANA News Agency – On last Wednesday Hossein Ronaghi who was in hunger strike has been hospitalized as his health condition became critical.
According to a report by Human Rights Activists News Agency (HRANA), around 1 O’clock on last Wednesday Hossein Ronaghi Maleki was transferred to Shahid Modarres hospital and hospitalized in the urgency.
Meanwhile his medical dossier has been sent to the forensics but they did not issue any medical furlough for Hossein yet.
Seyyed Ahmad Ronaghi Maleki the father of this political prisoner asks Mr. Jafari Dolatabadi the Tehran prosecutor to issue the medical furlough for his son to get proper medical treatments.
Also he said that he contacted to Jafari’s office many times but got no answer.
It is worth mentioning Hossein’s father worries about his son’s health and said “If they will not take care of Hossein’s condition he will die.”

0 thoughts on “Hossein Ronaghi hospitalized because of critical health condition”