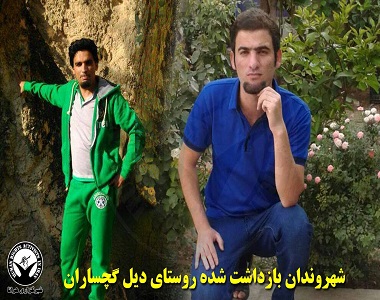 According to the report of Human Rights Activists News Agency in Iran (HRANA), the two-year imprisonment sentence for Ghasem Ghanbari and Mir (Sayed) Mohammad Miri, which had been previously issued by the Gachsaran Revolutionary Court, was confirmed by the Appeals Court.

A source close to the families of these political activists said: “The third branch of the appeals court of the Kohkiluyeh and Bouyer Ahmad province, headed by Saeed Sadeghi and Sayed Isa Hassani, has verified the imprisonment sentence. The verdict was recently shown to the two men.”

Earlier, HRANA had reported that the Revolutionary Court of Gachsaran in Kohkiluyeh and Bouyer Ahmad Province had sentenced Hasan Bozorgzadeh, Sayyed Mohammad Miri and Ghasem Ghanbari to six months, three years and three years’ imprisonment, respectively and all three to 2 million IRR fine and 30 lashes.

The court also sentenced all three defendants to two years of prohibition from membership in political parties, organizations and political groups.

These three activists have been sentenced to a fine of up to 2 million IRR and 30 lashes due to narcotic drug misuse.

A source close to these citizens told HRANA’s reporter: “The charge of using drugs is baseless, and we consider it merely a mean to destroy and devalue the reputation of these people who do political activities. These good, educated people with libertarian ideas are from the famed families of the Dale Village.”

However, according to the judge’s order, the application of article 134 of the Islamic Penal Code was considered for the multiplicity of offenses for them, so the sentence for Mohammad Miri and Ghasem Ghanbari was reduced to two years, with counting their detention time, although for Hassan Bozorgzadeh there was no change in the situation due to the lack of variation of charges.

It is worth noting that Sayyed Mohammad Miri was arrested by the intelligence agency on “Ashura in 2009”, along with his brother, uncle and several others, because of political activity in this village.

Recently, Abdollah Alireza Nezhad, one of the political activists in this village, was arrested by the security forces because of his political activity in the Cyber Space and was transferred to Gachsaran Prison on charge of propaganda against the regime.

The village of Dale, from the city of Gachsaran in Kohkiluyeh and Bouyer Ahmad province, has a population of 2,087 persons with 482 households according to 2006 census.