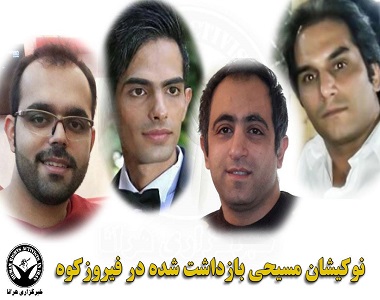 HRANA News Agency – After one week since the arrest of 5 Christians in Firoozkooh, there is no information about the place that they are being detained at. Their names has not been registered in any of Tehran’s prisons and efforts made by their families and lawyers had no result.
According to the report of Human Rights Activists News Agency (HRANA), there is no information about the status of Ramin Bet Tamers, Amin Afshar Naderi, Hadi Asgari, Mohamad Dehnavard and Amir Saman Dashti, 5 Christians who went for picnic to Firoozkooh, and were arrested by the intelligence forces on Friday, August 26.
A close source to their families told HRANA’s reporter, “Their families do not know which detention centre or prison they are being kept at. They were told that they were in Evin. But authorities in Evin are denying it. The families are even told that none of those names were registered in any of Iran’s prisons”.
The source also said, “Yet no lawyer has intervened; in fact it is impossible to intervene. Few lawyers have tried but they did not succeed”.
This source emphasized that, “The main concern of the families is that they do not know the place that they are being kept at, which has made them unable to follow up their cases”.
Raeil Bot Amarz, Amin Afshar Naderi, Hadi Asgari, Mohammad Dehnavi and Amirsaman Dashti went for picnic and fishing, along with their wife on Friday, August 26. Around 1 pm intelligent service forces raid to their station and separated men from women. When Amin Afshar Naderi asked warrant, he was beaten.
Need to be mentioned, Raeil Bot Amarz is son of the former head of the Asuri church of Pentikasti in Sharara, in Tehran, who has previous arrest in his record.