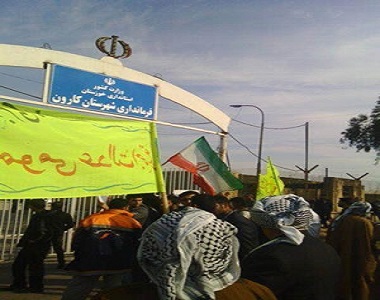 HRANA News Agency – Resident of Koot-e-Abdullah gathered in front of governor’s office and showed their protest at the negligence of their rights by government officials and authorities.
According to Human Rights Activists News Agency (HRANA), in this gathering, protestors addressed high unemployment rate, shortage of educational facilities and lack of basic services in the region and mismanagement of municipality as their issues, on Monday, December 1st. Protestors believe authorities and government officials just care about the central area and has forgotten the rural areas.
Protestors believe low level of hygiene is resulted from absolute ignorant of authorities toward Koot-e-Abdullah and mismanagement in municipality. Existence of open sewage, availability of sewage in some streets due to saturation of soil, abundant of vermin animals like rate and mouse and insects in residential areas are the pointed issues that perceived as the cause of diseases and people has asked for solutions.
One of protesters said, “We will continue our movement till we achieve our legal rights”.
Need to be mentioned, the populated and rural area of Koot-e-Abdullah was renamed to Karoon by the government, but there was no change in the condition of its residents.