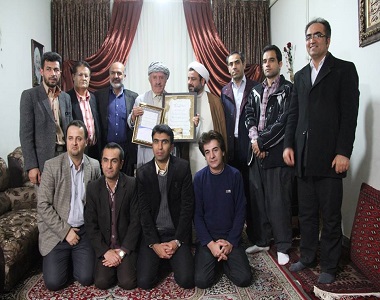 HRANA News Agency – A group of journalists paid a tribute to Mohammad Serajoddini, the managing director of Noor-e-Islam, by gathering in his house, and called the continuation of previous administration’s policies about the press, very depressing.

According to the report of Human Rights Activists News Agency (HRANA), in this meeting, the Kurdish journalists criticized the continuation of previous administration’s policies on press and called it depressing.

These journalists mentioned government’s ignorance toward condition of press in Kurdistan and also financial difficulties that some journalists are faced with, as major issues that need to be dealt with.

In this meeting, Mohammad Serajoddini whose magazine was halted from publication due to the pressure of some organizations during Ahmadinejad’s second administration criticized Ahmadinejad’s approach toward Kurd publication.

Serajoddini called Kurd journalist as the most vulnerable and said, “unfortunately, Kurd journalists and Kurd press always were ignored and it is hoped that in the administration of “counsel and hope” would provide a suitable condition for Kurd and free journalists”.

In the meeting, the Director General of Culture and Islamic Guidance of Kurdistan, and some other managers had joined journalists and visited Mohammad Serajoddini.

Rahim Jafari, , the Director General of Culture and Islamic Guidance of Kurdistan, called the security approach toward Kurdistan press wrong and said, “Rohani administration is trying to provide a secure environment for journalists and in this regard will have a specific attention to Kurdish press”.