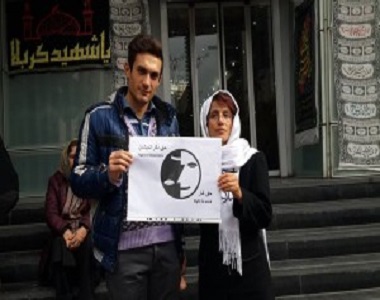 HRANA News Agency – The case of Peyman Mirzaee is being reviewed at Branch 3 of Shahid Moqaddasi Court and he is refused to get temporarily release on a bail.

According to the report of Human Rights Activists News Agency (HRANA), Peyman Mirzaee a follower of Erfane Halghe who has been arrested after the protest near the Human Right Council building has confirmed his health in a phone call.

The case of Peyman Mirzaee is being reviewed at Branch 3 of Shahid Moqaddasi Court by Judge Hossieni.

It is important to mention that on Tuesday 27 January, several followers of Erfane Halgheh (Interuniversalism Mysticism) and Tehrani citizens attempted to gather in Esfandiar Street and in front of Human Rights Council in Judiciary to express their concern about the condition of Mohammad Ali Taheri, the founder of this mysticism.