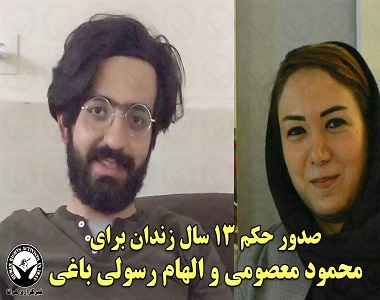 HRANA News Agency – According the verdict issued by Judge Moghiseh of Branch 28 of the Tehran Revolutionary Court, Mahmoud Masoumi and Elham Rasouli Baghi, two civil activists were respectively sentenced to 12 years and 1 year imprisonment due to attending the protest gatherings, contacts with the families of detained activists and insulting the leader.

According to the report of Human Rights Activists News Agency (HRANA), Mahmoud Masoumi and Elham Rasouli Baghi were sentenced to 12 years and 1 year imprisonment in a joint case by Tehran Revolutionary Court.

The two civil activists were arrested in a gathering in protest against corruption in Iran in front of the Dena Tire building in Tehran on Thursday, May 12, 2016.

The Sarallah base of the Revolutionary Guards Corps interrogated these two citizens. They were released on the bail on June 13, 2016.

The court hearing of Mahmoud Masoumi and Elham Rasouli was held by the presence of the defendants and Payam Derakhshani, Ms. Rassouli’s lawyer in Branch 28 of Tehran Revolutionary Court headed by Judge Moghiseh on  July 1, 2017.

Judge Moghiseh found both defendants guilty and convicted them by the end of the hearing.