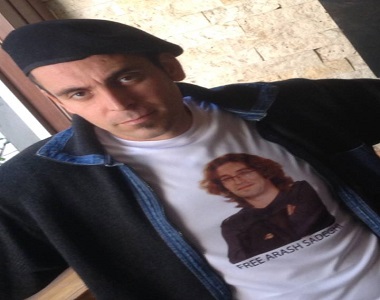 HRANA News Agency – Majid Abedin-Zadeh Moghadam, political prisoner in ward 8 of Evin prison, is held in a concerning condition in the sixth month of his detention.
According to the report of Human Rights Activists News Agency in Iran (HRANA), despite his objection to his 6-year imprisonment sentence in March last year, the final court verdict and the result of the court of appeal has not been determined, yet.
Majid Moghadam is one of the survivors of Kahrizak detention of 2009, who was arrested for third time on 4th December 2014, by the “Sarallah Headquarters” of Revolutionary Guards of Islamic Republic of Iran in his father’s house in Karaj, and after spending about three months in solitary confinement in early March this year, he was transferred from ward 2A of Revolutionary Guards to ward 8 in Evin prison.
This traumatized person by the incidents in 2009, and a survivors of Kahrizak detention, had been already suffering from psychological and mental problems which were caused by the trauma in Kahrizak detention and according to his close friends, he had mental problems and by taking sedatives medicines and under medical treatment, he was able to have almost a normal life.
Majid Moghadam, after about 6 months of his detention, is currently in ward 8 of Evin prison, where in addition to its over capacity population and inadequate health conditions, principle of separation of offense has not been respected and political prisoners are kept in mixtures with financial crimes and fraud.
Just a few days before twenties birthday of Majid Abedin-Zadeh Moghadam, he was sentenced to 6 years by Branch 26 of Tehran’s Revolutionary Court, based on the primitive court’s charges, and there is a concern that with his several days hunger strike and psychological condition also, with chaotic conditions of ward 8 of Evin Prison, his health would be in serious danger.
It is noteworthy, that Majid Moghadam is one of the four survivors of Kahrizak, who followed his complaint, to the final stages, of Saeed Mortazavi, despite all the pressures and threats.