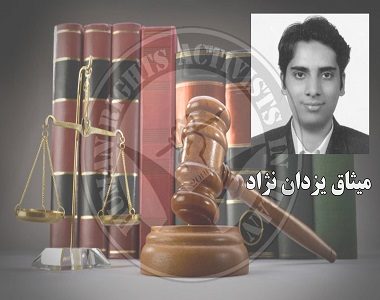 HRANA News Agency – Misagh Yazdannejad, former political prisoner was sentenced to 5 years in prison in a new case. He had been released in May after serving 9 years.
According to the report of Human Rights Activists News Agency (HRANA), Misagh Yazdannejad was sentenced to 5 years in prison just 10 days after being released from prison.
A close source to him told HRANA’s reporter: “This sentence was because of his 4 months of detention in IRGC’s 2-A ward in Evin prison when he was interrogated because his civil activities in the prison such as participating in releasing statements or hunger strikes.”
“Just 10 days after being released from Semnan prison, his lawyer, Miss. Shima Ghushe received the verdict and informed Mr. Yazdannejad about it.” Said the course.
This sentence is now in the appeal court.
Misagh Yazdannejad was arrested on September 10, 2007, and sentenced to 13 years in prison by judge Salavati, in branch number 15 of the revolutionary court. This sentence was confirmed in branch number 36 of the appeal court.
He was charged with attending in 19th anniversary of massacre of political prisoners in 1988.
His request for a retrial was approved and resulted in invalidation of the sentence while he was serving the 8th year of his sentence.
Misagh Yazdannejad was transferred from hall number 12 of Rajaei Shahr to ward 2-A (controlled by the IRGC) of Evin prison on October 26, 2015 and was kept there after that.
He was exiled to Semnan prison in the 9thyear of his sentence. This political prisoner was transferred to Evin prison on February 29 and had a cabin visit with his family.