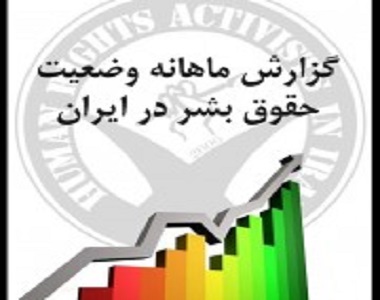 HRANA News Agency – The following is a monthly report summarizing the human rights status in Iran in September/October (Solar calendar, month of Mehr), 2014. This report has been prepared by the office of Statistics and Publications of the Human Rights Activists Association of Iran. Considering the ongoing suppression and ban on independent human rights activist organizations in Iran, this report may not be considered a comprehensive and complete reflection of the current status of human rights situation in Iran. It should be noted that the department of Statistics also publishes an annual report about the human rights conditions in Iran in the form analytical and statistical report.

During months of September/October 2014, systematic Human rights violations in Iran continued with a quick pace just like before. The second day of this month saw the controversial execution of “Mohsen Amir Aslani” on the charges of “Corruption on earth” and “Heresy in religion” along with three other prisoners at Rajaee Shahr Prison. Further executions followed In Mashhad, Zahedan , a  juvenile who committed murder at the age of 14 in Tabriz and group execution of 7 prisoners at Qezel Hesar Prison. A 22-year-old who was charged with the homicide of “Ali Khalili” (a Basiji militia who was also a student at Hawza) while Ali was performing “Enjoining good” received a death sentence.

During this month, Human Right organisations expressed their concerns about the possible execution of “Saman Nasim”. He was charged with being a member of anti-regime opposition Kurdish group while he was 17 and has been sentenced to death. In his report, Ahmed Shaheed, the United Nations Special Rapporteur for Human Rights in Iran criticized the execution of 852 people in Iran during the last year. In his report he described the increasing number of execution as “alerting” and demanded the stop of executions.  At the same time with Ahmed Shaheed’s report, Human Rights Activists Association of Iran also published a report in which at least 548 executions were reported from October 2013 to October 2014.

During the last month several incidents confirmed the continues and increasing pressure on Sunni followers in Iran such as: arrest and uncertainty about the situation of “Hafez-Tohid Ghoreishi (Molavi)” Fridays prayer Imam of “Imam Shafeie” Mosque at “Shalqon” village -a rural district of “Talesh”  district in Gilan- ; alleged beating of Sunni prisoners and their families at Karaj Rajaee Shahr Prison ; arrests of more than 20 Sunni citizens in “Taze Abad Javanrood”; arrests of 14 Sunni citizens in “Torkaman Shahra”; arrests of 4 Sunni students in Kerman state .

Following further Human Rights Violation of Religious Minorities in Iran, a week after the protest of “Daravish” (Sufis sect followers) was crushed by the security forces in front of Tehran Public Prosecutors office and police injured tens of protesters by beating them and shooting tear gas at them, about 1000 “Gonabadi Darvish” gathered to send their objection message to the government and the authorities.

The gathering was formed after Tehran’s chief of police promises to meet the demands of the “Daravish” and prisoners on strike proved to be empty. In additions, the statement made by the Minister of Intelligence in which he called “Daravish” as people with no religion has raised their anger.

This month was also a difficult one for Bahais. Examples of the most visible violations of Bahai citizens’ rights were: Arrest and conviction of a young Bahia follower in Shiraz; putting pressure on the family of “Ataollah Rezvani”( a Bahai citizen who was murdered mysteriously ) to accept the closure of the case; and the exile of “Farhad Eghbali” a Bahai Prisoner to Karaj Rjaee Shahr Prison.

As it was anticipated, this month proved to be a tougher month for converted Christians. According to the reports, 3 Christian priests “Behnam Irani”, “ Reza Rabbani” and “ Alireza Haghnejad” were sentenced to 18 years imprisonment with exile at Islamic Revolutionary Court.  3 converted Christians “Shahram Ghaedi”, “Heshmat Shafie” and “Emad Haghi” were arrested in Folad shahr in Isfahan.

One of the most concerning reports published in the month of Mehr was about the injury of a 9-year-old labourer at work. Although this report can be classified in the labour and work safety domain, but Children Rights violation and child labour complicated issue is more of importance in this report.

In Children Rights domain, it is important to mention the act of an Elementary school’s principal in Bandar Abbas who physically punished all fifth year students. The punishment was given to the fifth year class while their teacher was absent for the day and students were making noises. The Principal confirmed that he physically punished them and mentioned that he would do it again if it is necessary.

In the month of Mehr, apart from the vast issue of compulsory cover (Hijab) for women, approval of new laws of “Enjoining good and forbidding wrong” and the tragedy of Acid attacks in Isfahan, Iranian women were also subject to attacks and discriminations in cultural domain.  Prosecution of a female who performed solo singing at Talar-e-Vahdat and prohibiting female musicians from playing at a concert in Isfahan are examples of these discriminations.

In the area of workers, just like other areas, this month was full of incidents. Two widespread strikes in Ahwaz and Rodbar and the layoff of 100 workers at Abadan Refinery while they have not received the last three months wages were some of these events. In addition, gathering of 700 Telecommunications’ employees; further prevention of hundreds of workers at “Navarad va Loleh Safa” from entering the factory; protest gathering of current and retired workers of Mazandaran Weaving factory for being at a loss with regards to their salary were among the events of this month. Furthermore, death of a Corn Drying factory worker at Ravansar and death of two workers in a fire incident at a production workshop have added to this month calamities for Iranian workers and labour society.

In the domain of unions and union rights, this month included the controversial issue of suspension of “Nasrin Sotoudeh” well-known lawyer and member of the human rights defenders union.  Branch Two of the Lawyers’ Disciplinary Court at the Iranian Bar Association banned “Nasrin Sotoudeh” from her legal practice for three years and she went on strike in front of the Iranian Bar Association building.

In the area of LGBT, this report has also highlighted the arrest of a youngster after he left his cell number on his Facebook personal profile to find a gay sex partner.

The environment also received a warning along with the water Supply and Air pollution crisis. “Hossien Amiri Khamkani”, Zarand representative at Iran’s parliament said: “the biggest artificial jungle of the world in north of Kerman is on the verge of extinction.”  In addition, the director of Iran National Project of Preserving Ponds said: “about 70% of ponds across the country are at critical stage. Also, 200 villages evacuated because of drought at Sistan and Baluchistan state.

Another bold incident worth mentioning with regards to Human Rights in Iran was the production and publication of the booklet of “Mine, the Silent killer of Iranians” by Human Rights Activist Association of Iran. This book is an unprecedented research about the victims of Mines in Iran covering the past 24 years. According to this booklet 8034 victims affected by Mines in Iran in the mentioned period.

Particular attention to the violations of human rights

Such cases are the death of one citizen during a Police raid (NAJA) for confiscating satellite dishes. Also, the attempt of Judiciary system to execute the death penalty of “Reyhaneh Jabbari” – a young girl who claimed that she was defending herself while she committed homicide- resulted in extensive complaints which temporary postponed the execution.

After 100 days of detention, “Ghonche Ghavami” and her cellmate “Atena Farghdani” went on hunger strike in protest to their unclear fate which moved the public opinion to a huge extent.  Transfer of “Zahra Rahnavard” to the hospital for an eye operation was another human right issue which attracted a huge public opinions’ attention.

Instating the “Enjoining good and forbidding wrong” protection law in Iran’s Parliament, widespread arrests of Kobani supporter activists in Tehran and also unhuman act of Acid attacks on women in Isfahan with the excuse of Bad- Hejabi ( not following Islamic dress code) were among the most noted issues in Mehr.

Human rights reports in the shadow of “Little Attention”

In contrast to the previous section of the report, many of the human rights reports faced “little attention” or even no attention by the media including social media activists which are forming a part of public opinion. It is important to note that these neglects are often unintentional but there are also intentional discriminations which could facilitate even further violations of human rights in Iran.

An example is the report about the injury of 4 students when a classroom ceiling collapsed in a school located in a village. On a different occasion, “Abolfazl Rostami”, a 15-year-old student from the city of Robat Karim in the state of Tehran was shot to death during the military training.  This is a clear example of the United Nations Convention on the Rights of the Child violation which states: Children should not be trained or used in military environment. This news has received very little attention.

In this section, there are reports about the prevention of Eyd-e-Ghorban prayer for Sunni citizens in Tehran, which is a continuing wrong custom since the Islamic Revolution which resulted in the widespread violation of large Sunni population. In addition, several followers of Erfan-e-Halgheh ( Interuniversalism ,which is a Religious- Conscience believe ) were arrested while they gathered to protest against the imprisonment of their spiritual leader Dr Mohammad Ali Taheri . These were also remained hidden from the public opinions’ attention.

Iran Association of General Surgeons reported an increase in the number of Breast Cancers.  This association issued warnings about the reduction of age of Breast Cancer among young women. According to their statistics, one in every four women is diagnosed with Breast Cancer.

While Iranian people are living in fear and unrest from the recent Acid attacks and incompetence of security forces in dealing with the situation and arresting those responsible in Isfahan, the commander of the “Sepah Saheb-o-alzaman” in Isfahan claimed that they have identified and destroyed the biggest cyber group of anti- morality in this state. He also added:” this group formed of six head members who created a platform for anti-morality behaviour and obscene cyber environment. They were recruiting members (young males and females) and were taking advantage of these members.”. These arrests also received little attention from the public in the shadow of the recent events in Isfahan.