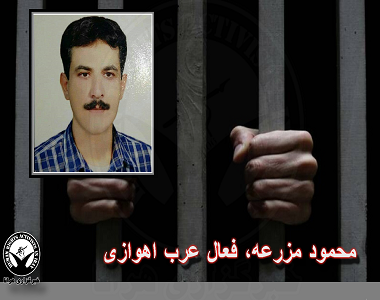 HRANA News Agency – Mahmoud Mazraeh, citizen of Ahvaz, has been detained by the intelligence office in this city, since late October, but has not had a phone call or a visit with his family.
According to the report of Human Rights Activists News Agency in Iran (HRANA), Mahmoud Mazraeh, born in 1973, single and industrial electrical technician, a former employee of Steel Industries who lives in Kampelo area in Ahvaz, was arrested by the Ahwaz Intelligence Bureau, outside his house and was taken to an unknown location.
According to those close to Mr. Mazraeh, after two days of his detention, the Intelligence Agents raided the home of Mazraeh family, and after searching the house, took his computer, several books along with several CDs and computer RAM.
According to this report, since Mahmoud Mazraeh was arrested, his family has gone to the Intelligence Office located in Amanieh area in Ahwaz, as well as intelligence headquarter office located in Golestan boulevard and the Revolutionary Court and other judicial and security institutions, but the family was not informed of his condition and have not met him.
A source close to Mazraeh family said that the Intelligence office told his family that Mahmoud Mazraeh was held in their detention.
The source said: “The family requests all human rights organizations, Amnesty International, Human Rights Special Rapporteur in Iran and Human Rights Watch to put all their efforts to clarify his situation”.