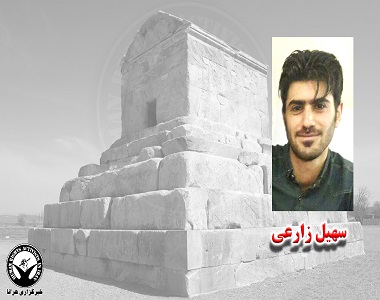 HRANA News Agency – Sohail Zarei, one of the detainees of the “International Day of Cyrus” at the Pasargadae Cultural Heritage, is held in Shiraz prison in limbo and is still deprived of having contact with his family.
According to the report of Human Rights Activists News Agency in Iran (HRANA), Soheil Zarei, son of Morteza, one of the detainees of the “International Day of Cyrus” at the Pasargadae Cultural Heritage, who was transferred recently from the Ministry of Intelligence office to the general ward in Shiraz prison is still in an undecided condition and without permission to contact his family.
It should be mentioned that on October 28, 2016, the citizens’ traffic in Pasargadae cultural heritage was under “strict security measures and limitations”. However, on the occasion of October 28, with the unofficial title of “International Day of Cyrus” plethora of Iranians gathered near his tomb at Pasargadae cultural heritage collections.
It is noteworthy that, Ayatollah Hossein Nouri Hamadani, Shia cleric in Qom, after that gathering in a threatening tone said, “We are again alive, sitting and watching” showed a critical reaction towards the rally on Cyrus Day at Pasargadae cultural heritage and called the participants at the rally as “anti-revolution”.
Mohaddeseh Ghasemi, poet and scholar of philosophy from Arak and Homayoon Panahi, 20-year-old student of history at the University of Khwarizmi and resident in Tehran, are two other citizens who were arrested in this regard and HRANA had previously released their identity, and reported about their condition.