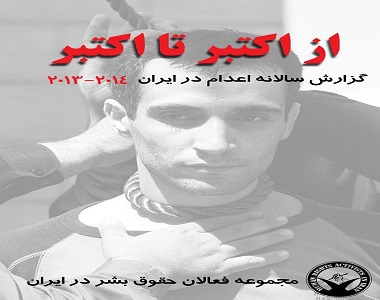 HRANA News Agency – Just like the previous years’ custom, on 10 October “the 12th anniversary of  World Day Against Death Penalty”, Office of Statistics and Publications of the Human Rights Activists Association of Iran has published a report , reviewing the last year in the domain of Executions in Iran. (It is important to clarify that considering the recent Report of the Special Rapporteur on human rights in the Islamic Republic of Iran about executions in Iran, there will be differences in statistics and numbers  provided in that report with the one published by HRANA due to their difference in time scale).

It has been mentioned on the following report that during the period of 10 October, 2013, to 09 October, 2014, at least 548 citizens were executed by Hanging. This number shows 2% increase compared to the same period for 2 years ago.  Death penalties and executions are carried out while most of the accused are deprived of a fair trial in Iran. In addition, as the activity of any independent Human Rights Groups in Iran is banned by the government, this report cannot be considered as comprehensive and inclusive of all cases.

The report is mostly made based on the collection of official statements about death penalty sentences and executions of citizens, made by Judicial Authorities to the government media channels. Further information collected by Human Rights Activists News Agency (HRANA) and provided by other independent reliable sources which are used in preparing the following report.

The Most Controversial Execution of the Year

A prisoner named “Alireza. M” was hanged on Wednesday 9 October 2013 at Bojnord Prison. He woke up a day later at the morgue and was executed again.

Bojnord Prison Authorities secretly executed a prisoner.  After 24 hours, he showed vital signs and was transferred to the hospital.

A legal expert employee of court announced that although his death penalty was executed on Wednesday, he will be executed again after he finds his health.

The most controversial execution incident of the year

On 14 October 2014, after the execution of a prisoner accused of murder at Ilam Central Prison, the family of the prisoner threw a Pellet Grenade towards the entrance door of the prison which injured several security employees.

The security forces identified the person responsible at once and arrested him while he still had the safety pin in his hand.

About 20 people were injured at this incident but no Judicial Authority announced the identity of the prisoner and the details of his case. If it wasn’t for this incident, this execution wouldn’t be on the news.

The highest number of executions on a single day

The highest number of executions within 24 hours took place on 04 November 2013, during which 23 people executed in Oromiyeh, Kermanshah, Kerman and Ahvaz which was a rare incident of its type.

The highest number of executions in a County

The highest number of executions in Public

The highest number of executions in a prison

The most common accusations

During the mentioned period of this report, 38% of all executions were the punishment of Narcotics charges, 29% for Murder, 4% for Rape, 7% for Waging war against God/State and the remaining 22% was unknown.

The Death Penalty and executions for underage criminals

“Saeed Zolfaghari”, “Mohammad Ahsani” and “Milad Sani” are three death-row prisoners at Karaj Rajaee Shahr Prison. They are on the execution waiting list although they committed murder while under 18.

Also, the case of a young woman who is accused of murdering her husband has been activated upon the request for a retrial at the Supreme Court.  This lady- Maryam- was supposed to be executed last week. Maryam shot his husband at the age of 17.

The best position against executions in Iran

The most important international movement to limit executions

In a statement, Office of the High Commissioner for Human Rights (OHCHR) in Geneva, expressed its concerns about the increasing number of executions in Iran and issued a warning. “Ravina Shamdasani”, a spokesperson for the United Nations said: although there were positive signs of improvements in Human Rights domain after the election of “Hassan Rohani” as the President of Iran, the new government have not made any changes in terms of executions.

The movie “Khat Vijeh”, directed by “Mostafa Kiaie” was screened on the night of 06 April, 2014 with the intention of helping a young death-row prisoner. 180 Million Tomans were collected from the tickets’ sale and contributed to stop this young prisoner’s execution.

548 people who received death penalty by Iranian Judicial system were executed during the last year (from 10 October 2013 until now). 5% of these executions which comes to 30 executions were held in public places.

Statistical comparison with the year before last