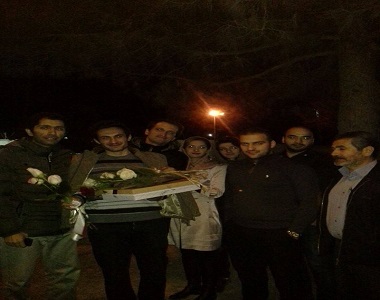 According to the report of Human Rights Activists News Agency in Iran (HRANA), Peyman Mirzaee who was arrested on 27 January 2015 in a protest gathering of Erfane Halgheh followers close to the Human Rights Council building in Judiciary has been released last night from prison by providing a 100 million Tomans bail.

It is important to mention that on Tuesday 27 January, several followers of Erfane Halgheh (Interuniversalism Mysticism) and Tehrani citizens attempted to gather in Esfandiar Street and in front of Human Rights Council in Judiciary to express their concerns about the condition of Mohammad Ali Taheri, the founder of this mysticism.

They have been confronted by security forces that prevented the gathering. Peyman Mirzaee was arrested at the same gathering after being beaten by security forces. He was transferred after several weeks from Evin Prison to Karaj Rajaee Shahr Prison on the order of Public Prosecutor Office.