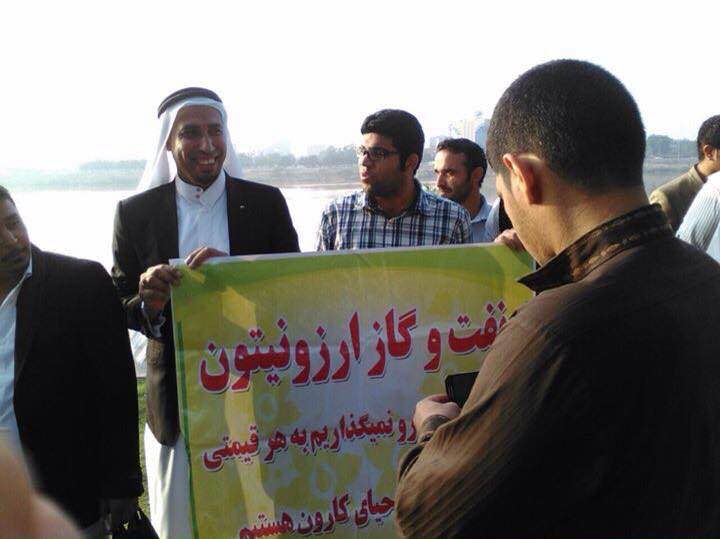 HRANA News Agency – Following the gathering of hundreds of Ahvaz residents for supporting saving Karoon River, police and vigilant forces has arrested some of protestors.
According to Human Rights Activists News Agency (HRANA), hundreds of Ahvaz residents gathered on eastern shore and made a human chain to show their protest at government‘s hypocrisy regarding Karoon’s condition.
Few moments after initiation, police ad vigilant forces attacked the protestors and arrested some of them.
Human right activists have reported the name of six of arrestees as following:
Shahin Kabi, Khaled Mahavi, Naji Abiyat, Mehdi Bait Sayah and Hamadi
This attack was carried out, while Ahvazi protestors were condemning the government’s biased and oriented policies regarding redirecting Karoon’s water to the centerel part of country in favor of powerful lobbyist. Protestors have pointed to the fact that thousands of Ahvazi residents have been victimized, and called the decision of redirecting Karoon’s water to Isfahan, made in “absolute biased”.
Police also had blocked the streets in conjunction with the location of gathering and prevented the joint of other group of people to this human chain.
Ahvazi protestors have asked for interpellation of energy minister and asked him to take the responsibility for dangerous consequences of decisions such as redirecting Karoon’s water, keeping water behind the dams and prevention water from entering the area.
The attack of police forces is happening following of support of government for redirecting Karoon’s water to Isfahan. This action has been carried out while the Ahvaz environmental crisis has found global attention and Ahvaz is recognized by international organizations as the most polluted city in the world. This action has made Ahvazi residents very angry.
Following this decision, Sharif Hasani, MP of Ahvaz sent a letter to the president and alleged him for ignoring the crisis in Ahvaz. The vice president in a strange action has denied that what is happening in Ahvaz is crisis, and called Sharif Hassani a liar.
According to the statistics of health and hygiene ministry, during the past decades the rate of cancer in Ahvaz has risen by more than 500%. Recently, by the order of government, all of governmental organizations are banned from publicizing any statistics about victims of environmental crisis in Ahvaz. The ministry of health and hygiene has removed its recent reports about the cancer, from the website.