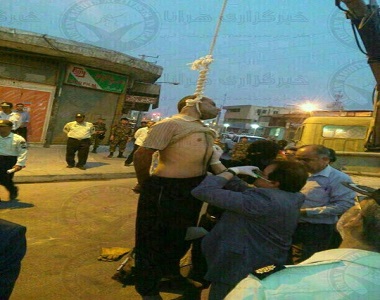 HRANA News Agency – A prisoner was hanged in public in Borazjan.

According to the report of Human Rights Activists News Agency (HRANA), a prisoner who was charged with corruption on the earth has been hanged in public in Borazjan on Sunday August 24th.

“The man was charged with killing 2 women and stilling their properties.” Said an eye-witness of the execution

He was arrested last year and the first branch of the Revolutionary Court of Borazjan had sentenced him to death. The sentence was confirmed by branch 11 of the Supreme Court.