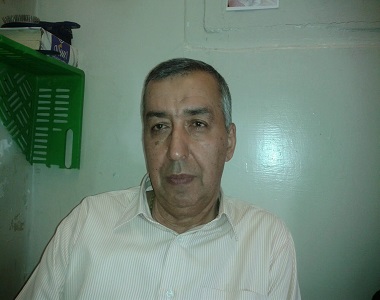 HRANA News Agency – Asghar Ghatan has been repeatedly detained and imprisoned due to the political activities since he was 14. The political prisoner is currently held in Rajai Shahr prison in Karaj despite illness and repeated confirmation of his inability to endure imprisonment.
According to the report of Human Rights Activists News Agency in Iran (HRANA), Asghar Ghatan, born in 1954, the last time was arrested by the intelligence forces on January 9, 2011 and after 45 days of interrogations in ward 209, he was released on the bail due to his illness and physical condition and by physician’s recommendation. He was sentenced to 5 years in prison for advocacy of MEK.
This 62-year-old prisoner, was summoned to serve his sentence on 23rd May 2012, and was transferred to ward 350, and on 1st June 2014, was exiled to Rajai Shahr prison.
Asghar Ghatan was arrested due to his political activities for the first time in 1968 at the age of 14. He has been detained in the 60s, 70s, 80s and 90s.
An informed source regarding this prisoner’s condition says, “Forensic has confirmed his punishment intolerance, but prison officials do not release him. Now he is taking about 30 painkillers a day and is suffering from heart problems, diabetes, high blood pressure, migraines, liver and spleen problems, and so far has had several surgeries done at his own expenses and part of his stomach and duodenum have been removed and he is seriously ill and cannot tolerate imprisonment.”
Asghar Ghatan was sent to medical furlough for the last time on May 30, 2016.