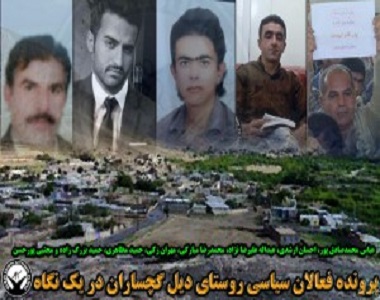 HRANA News Agency – In a very notable case, some of residents of Dil village, a rural area of Gachsaran, which had been started their civil rights inquires by using peaceful civil rights movements methods, following the 2009 presidential election including distributing night letters and by drawing graffiti, were identified by the security forces and arrested and tried. Among 8 people who were arrested 6 of them were tried and sentenced to prison.
According to the report of Human Rights Activists News Agency (HRANA), the wave of political and civil dissatisfaction about the society, community and environment after the 2009 presidential election has even shown itself in Dil village, a rural area of Gachsaran in Kohgilouyeh and Bouyer-Ahmad province.
Dil village has 482 families and a population of 2087, according to the 2006 census.

After a mass wall graffiti in Dil village on February 7, 2012, this village got under surveillance by security and Basij forces and. In the second attempt and after the trip of the governor, Ayatollah Malek Hossaini, slogans got more radical.
After few rounds of mass graffiti drawings about the people awareness and anti-oppression in 2009, about 150 night letters were distributed in one night in 2014.
In the beginning a person with the name of Abbas Sadeghi was arrested along with a taxi driver by Basij forces, after some night letters were found on them. For quite some time nobody had any information about him.
On January 4, 2014, all of the people who were in contact with Mr. Sadeghpoor were arrested by this organization.
The identities of these civilians are as following:
Hamid Mazaheri, senior university student in public relation major and security employee of oil and gas ministry.
Abbas Sadeghpoor, PhD student in law, master of law and bachelor in theology
Mojtaba Poorhasan, bachelor in English and retired teacher
Mohammadreza Mobaraki, mechanical engineer and marked student in 2009
Mehran Zakinejad, bachelor in management, unemployed
Ehsan Arshadi, bachelor in accounting and employee of oil and gas ministry
Abdullah Alirezanejad, diploma, unemployed
Hamid Bozorgzadeh, master in industrial engineering
Six of these namely Abbas Mohammadsedeghpoor, Ehsan Arshadi, Abdullah Alirezanejad, Mohammadreza Mobaraki, Mehran Zaki and Mojtaba Poorhasan were sentenced to prison and deprivation from membership in political groups and parties.
According to the issued sentence by Gachsaran revolutionary court, each of them was sentenced by judge Yousef Ahmadi, to two years in prison on charge of insulting the supreme leader, one year in prison on charge of propaganda against the regime and deprivation from membership in political groups and parties.
According to article 500, 514 and also applying article 134 of Islamic penal act by revolutionary court of Gachsaran, these citizens were sentenced to two years in prison and deprivation from membership and any activities in political groups of parties. However, the court decided to suspend one year of this sentence for the period of two years.
These arrests which intended to intimate Gachsaran citizens could not achieve its goal and graffiti drawings continued. Last time it happened was on Monday July 18.
Need to be mentioned, two activist in this case, with the names of Hamid Mazaheri and Hamid Bozorgzadeh, are still waiting to be tried.