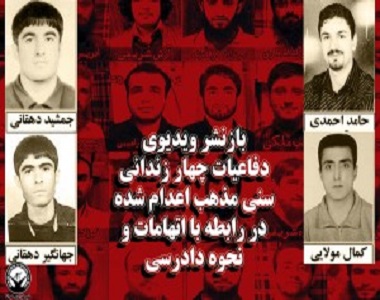 HRANA News Agency – At least 20 Sunni prisoners were executed by hanging in Rajaei Shahr prison, all of whom were charged with membership or cooperation with Tohid and Jihad group. These prisoners were arrested about 8 years ago. Jahangir Dehghani, Jamshid Dehghani, Kamal Moulayi and Hamed Ahmadi were four prisoners that had a chance to publish what their case was made of and what they were accused of. HRANA had published this video in 2013, but due to importance of clarification about the process of these cases, we publish this video again.
According to the report of Human Rights Activists News Agency (HRANA), on August 4, the Intelligence Ministry published a statement about the case that is famous as Tohid and Jihad and by giving some explanations accused them to have ties with terrorist activities. This ministry stated that the number of arrested members of this group is more than 100.
This statement is published in the mist of execution of at least 20 Sunni prisoners. The Judiciary is claiming that the judicial process of theses have been fair and legal.
This group of 20 people was not the first group who were executed, and previously other alleged prisoners with the same charges were hanged. For this reason, explanation of each of these prisoners about the case and their connection with other arrestees is important.
Jahangir Dehghani, Jamshid Dehghani, Kamal Moulayi and Hamed Ahmadi were four prisoners who were hanged along with Hadi Hossaini and Sedigh Mohammadi, but had a chance to release a short video in March 2015.
The following video which was recorded in January 2014 and published almost then by HRANA, is being shared again, due to importance of the issue and execution of at least 20 prisoners of this case: