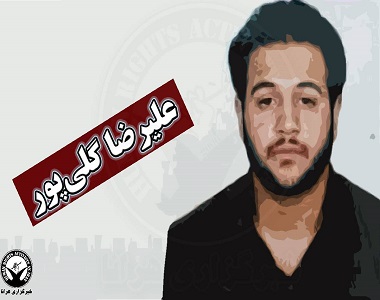 HRANA News Agency – Azita Gharebigloo, the lawyer of Alireza Golipour, security prisoner in Evin Prison, said that the prosecutor did not pay attention to the condition of Mr. Golipour despite issuing punishment intolerance verdict and having the right of medical furlough and he is still serving his imprisonment in uncertainty with the severity of his illness. He is currently able to tolerate pain only by injection of morphine.
According to the report of Human Rights Activists News Agency (HRANA), Azita Gharebigloo, lawyer of Alireza Golipour, security prisoner in Evin Prison, described her client’s latest status in an interview with HRANA’s reporter.
Azita Gharebigloo, lawyer of Alireza Golipour told HRANA: “Dr. Hemmati, neurologist in Tajrish hospital and Dr. Rahmani, doctor of Evin Prison, both stated that Alireza is in critical condition, but unfortunately, my client’s punishment intolerance verdict and medical furlough have not been approved.”
Ms. Gharebigloo added, “according to the rules of the prisons, every prisoner has legally the right to have furlough and can take leave three days a month. Mr. Golipour has been in prison for about five months and I have submitted my client’s request since January 14, 2018, but unfortunately, Tehran Prosecutor has not agreed so far. Mr. Golipour has been transferred to Tajrish hospital five times during the past five months. He has been hospitalized for eight days and new drugs were added to his previous medications, which has led to a high cost of medication.”
Ms. Gharebigloo said: “Alireza’s mother is currently suffering from heart disease and neurodegenerative disease and according to the specialist doctor, she requires the surgery due to the blackness of the foot. Unfortunately, my client’s mother does not allow her surgery in the absence of her son, and her condition is not favorable at all and she wants to see her son before going to the operating room. We have addressed these problems, including the illness and family problems of Alireza, in writing. Unfortunately, no order has been given.”
Ms. Gharebigloo told HRANA’s reporter: “Dr. Hemmati and Dr. Rahmani have repeatedly referred to punishment intolerance verdict according to my client’s severe conditions, and their recognition is that light and stress can motivate his illness. Unfortunately, my client has recently passed out for 3 times in a day and suffered from dislocation from the scapular area. He had wear splints on his hand since January 22, 2018. In addition, his eye was injured while falling down. I tried very hard for him to be transferred to Taleghani Hospital, which has not yet been arranged. Mostly Alireza is able to tolerate pain only by injection of morphine.
Ms. Gharebigloo told HRANA: “sometimes, when I referred to Mr. Haji Moradi, prosecutor, and told him about the problems and illness of my client, he told me very easily that Alireza wass healthier than me and him. Even when Alireza was hospitalized, he told me that he was patient, they did not care, either he would get better or die. What should we do? Unfortunately, the lives of security political prisoners are not worthy for them. This matter relates to when I tried to see my client’s medical records and he strongly disagreed. I said that the punishment intolerance verdict had been issued for my client, as well as a 6-month medical furlough. The prosecutor replied that it was not true at all. I insisedt to see my client’s medical records but he strongly disagreed.”
Ms. Gharebigloo told about her client’s illness: “Mr. Golipour is suffering from epilepsy, which has been exacerbated during this period, as well as heart disease and lymphatic infections. The three diseases, which were exacerbated by his hunger strike a while ago, get worse every day.”
Ms. Gharebigloo added at the end, “I, as his lawyer, have repeatedly stated that my client did not have the condition to serve, and even the specialist doctor in Tajrish hospital and Doctor of Evin Prison have repeatedly mentioned this issue. However, unfortunately, they do not pay attention to his situation. Moreover, his condition is deteriorating due to the lack of attention by the authorities. Dr. Rahmani told me at Evin hospital that my client had really cost the prison and did not have the conditions to serve. Another problem of my client is the delay in taking medications, for example, the drugs, which should be consumed today, will be delivered to him with a delay of three to four days. This condition for a patient is not suitable and would only cause the exacerbation of the disease.”
Alireza Golipour, born in 1986, resident of Tehran, telecommunications student and employee of the Ministry of Communications and Information Technology, was arrested by the Ministry of Intelligence in 2012 and was sentenced to 39 years and 9 months imprisonment and 170 lashes on charge of “Spying for the benefit of foreigners, specifically the United States” in Branch 15 of Tehran Revolutionary Court headed by Judge Salavati in 2015. This verdict was reduced to 12 years imprisonment by applying Article 134 and discount.
It should be noted that Alireza Golipour, member of National Elite Foundation of the country and Ph.D. student in electrical engineering in Germany, has been held in Evin Prison since 2012.