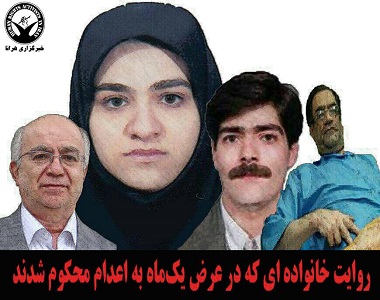 HRANA News Agency – Mohsen Daneshpour, Motahareh Bahrami (parents), Ahmad Daneshpour and Reyhaneh Haj Ebrahim Dabagh (son and daughter in law) along with Hadi Ghaemi were arrested on  December 28, 2009 as the security forces raided their houses and on  January 16, 2010 were tried and sentenced to death within a month by judge Salavati court without a lawyer.
According to the report of Human Rights Activists News Agency in Iran (HRANA), Ahmad Daneshpur Moghadam born in 1970 and his wife, Reyhaneh Haj Ebrahim Dabagh born in 1981 and his parents Mohsen Daneshpour Moghadam born in 1944 and Motahareh Bahrami born in 1954 with Hadi Ghaemi, their family friend were arrested on December 28, 2009.
The detainees were held in solitary confinement in ward 209 of Evin prison until the trial and were held incommunicado. After less than a month and only after five sessions of interrogation on January 16, 2010 they were tried and sentenced to death.
In 2010 the Appeal Court commuted Reyhaneh Haj Ebrahim Dabagh’s sentence to 15 years in prison and exile to Rajai Shahr prison, Motahareh  Bahrami’s sentence to 10 years in prison and exile to Rajai Shahr and Hadi Ghaemi’s sentence to 15 years in prison and exile to Gonabad. But Ahmad and Mohsen Daneshpour’s verdicts have been pending since announcement of the death sentence of a lower court and the case have not been sent to an appeal court yet.
After 4 years it has been clear that their cases are in the hands of the head of judiciary.
So far, lots of efforts have been done to hire a lawyer for the father and son but every time the power of attorney has been rejected by saying this sentence: “The verdict is death and does not require a lawyer.” A prominent lawyer who represented Reyhaneh Haj Ebrahim Dabagh and two other defendants, has sent the power of attorney for the Daneshpurs more than 10 times, but every time the application has been returned and after referring to the court, he was threatened to be arrested if he would insist in taking the case.
Because of this situation the Daneshpurs are also deprived of any furlough.
Hadi Ghaemi was exiled to Gorgan and returned to Evin prison and despite his age and multiple illnesses and even death of his mother, his request of furlough was not approved.
Motahareh Bahrami in 2010 and Reyhaneh Haj Ebrahim Dabagh in 2011 were exiled to Rajai Shahr prison and transferred to Qarchak prison on May 3, 2011 and returned to Evin prison after some days.
According to the doctors, Reyhaneh Haj Ebrahim Dabagh suffers from IBD and IBS and ulcerative colitis and intestinal disease due to the pressures and stress. She only uses painkillers. However, According to doctors the disease is improving day-to-day due to lack of specialized treatment for the disease by injecting sedatives.
Ahmad Daneshpour Moghaddam was diagnosed with bowel colitis disease who also due to chemical potent drugs and lack of access to special food dietary suffers from this incurable disease. The disease, which includes intolerance of prison have been listed in his case and even according to doctors may become a cancer.
Motahareh Bahrami after two or three times being sent on furlough, needed to receive moratorium due to multiple diseases and after a year of exile in the city of Karaj (her current location) was delivered to her.
Despite the prosecutor’s and the intelligence agency’s statements based on assistance to back the case of Mr. Daneshpur and apply Article 18, so far there has been no change in the status of their cases.
It is worth mentioning that Daneshpour family were arrested on charge of traveling to Ashraf (Former headquarters of the PMOI in Iraq) to visit their son for several days and relationship with these people. Reyhaneh only because of the association with the organization and Hadi Ghaemi also because of being one year in prison with Mohsen Daneshpour in 1980 were arrested because of being suspicious of collaboration with them.
Reyhaneh’s father was imprisoned for four years during 1980s. It should be noted that Mohsen’s two brothers were executed in 1981.