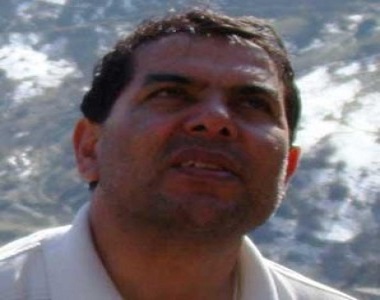 HRANA News Agency – After more than 7 months of the imprisonment of Rooein Otoofat, religious-nationalist activist, the Supreme Court have responded yet regarding the 10-years-in prison sentence.
According to the reports of Human Rights Activists News Agency (HRANA), Rooein Otoofat, religious-nationalist prisoner of Evin in ward number 8 who is serving his 10 years sentence, has not had a single day of furlough, and the Supreme Court does not give any response to the complaint of this political prisoner.
The wife of this prisoner has said to HRANA regarding her husband’s health condition that he did not have a bed since late July and was sleeping on the floor that had caused him physical problems. Besides, he had found skin issue at the beginning of his arrest. She also said that after getting a bed, his condition became slightly better.
Roghayeh Zarepoor, emphasized that the Supreme Court had not had any response to their complaints and after follow ups she was told that the decision would be sent by a SMS.
She also said that his husband’s lawyer “went to study the case, but he was told that the file is in the prosecutor’s office. We are working and there might be some changes in the file”. She added, “but when I applied for my power of attorney, I realized that the file is being kept in the sentence execution and not the prosecutor’s office”.
She said, his husband was not allowed to visit his lawyer and he could not have furlough.
She is told that her husband had to serve 1/3rd of the sentence (in this case 3 years and 4 months). This subject has been confirmed by Khodabakhshi, the supervisor prosecutor of Evin.
In this regard HRANA’s sources reported that the prisoners with charges related to security matters, or contact with conflicting groups or council of nationalist-religious activists should serve 1/3rd of their sentence in order to received furlough.
Need to be mentioned, according to the law, prisoners can receive parole after serving 1/3rd of their sentence.
The sentence of Rooein Otoofat, which is 10 years in prison, two years deprivation from activities in parties and political groups, cyber activities and other media, is confirmed in the court of appeal.
Rooein Otoofat was arrested on February 15, 2013 in his house, during a meeting with the name of cultural council of Ranginkaman (rainbow), by 20 intelligence service forces and was transferred to Evin. These meetings were held in his house since 2005.
Otoofat was released after 5 months on the bail. After being summoned with his family to the intelligence service office and some phone and written summons to Evin court, he was tried by judge Salavati and charged with “establishment of illegal and security threatening group of Council of Ranginkamanin, cooperation with illegal national-religious party and propaganda against the regime by issuing announcement”.
On July 9, 2014, he was summoned to branch number 15 of the revolutionary court and the verdict of the court was given to him. He sent his complaint to the appeal court 5 days later on August 12, 2014, which was received and registered by Mr. Babayi and Mr.PoorArab in branch number 54. The verdict of the court of appeal was issued on October 27, 2014 and was sent to his house.