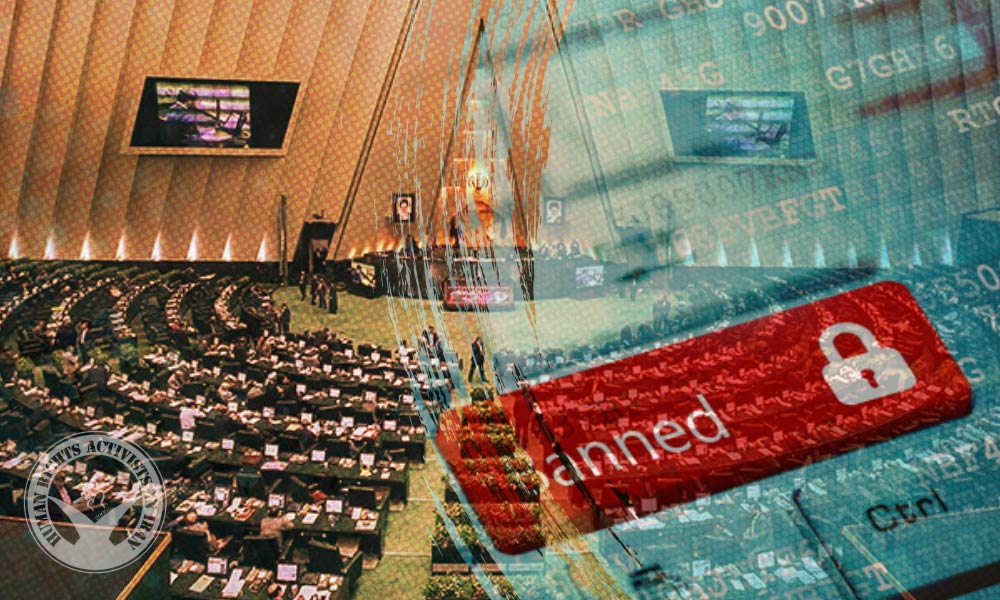 Human Rights Activists in Iran (HRAI) has joined other human rights and civil society organizations to raise a concern about the ratification of a controversial bill known as the “Regulatory System for Cyberspace Services Bill.” The organizations urged Iran’s Parliament to rescind the bill which would restrict the Iranian people’s access to the global Internet.
Below is the full text of the letter, and the list of signatories:

We, the undersigned human rights and civil society organizations, are alarmed by Iranian parliament’s move to ratify the general outlines of the draconian “Regulatory System for Cyberspace Services Bill,” previously known as the “User Protection Bill” and referred to hereafter as “the Bill.” If passed, the Bill will violate an array of human rights of people in Iran, including the right to freedom of expression and the right to privacy. We urge the Iranian authorities to immediately withdraw the Bill in its entirety. We further call on the international community, along with states engaged in dialogue with Iranian authorities, to ensure that the promotion and protection of human rights in Iran is prioritized, including by urging Iran’s parliament to rescind the Bill as a matter of urgency.

While UN Human Rights Council member states will soon vote on whether to renew the mandate of the Special Rapporteur on Iran, the Iranian parliament is attempting to further curtail the rights of people inside Iran with passage of this Bill. If implemented, this will carry grave risks of increased and even complete communication blackouts in Iran, and it is likely to be used as a tool to conceal serious human rights violations.

While we welcome the Iranian parliament presidium’s decision to annul the 22 February 2022 ratification attempt by the special parliamentary committee, we are still alarmed at the ratification attempt following a vote of only 18 parliamentarians. The threat of this Bill passing looms. In July 2021, parliament voted to allow the Bill to pass under Article 85 of the Iranian constitution. This   would mean a small 24-person committee (with a majority vote of 18 to pass) within parliament could ratify the Bill for an experimental period of between three and five years, circumventing typical parliamentary procedures. This unusual Article 85 process, and the moves to ratify it on 22 February, demonstrate that the authorities remain adamant to take forward this regressive legislation despite the domestic and international outcry. We are still concerned the Bill’s enforcement is at the whim of a small committee attempting to circumvent the rights of an entire country.

The undersigned civil society groups are gravely concerned that the passage of the Bill will result in even further reductions in the availability of international Internet bandwidth in Iran and violate the right to privacy and access to a secure and open Internet. Particularly alarming are provisions of the Bill that place Iran’s Internet infrastructure and Internet gateways under the control of the country’s armed forces and security agencies. In the latest draft of the Bill, the Secure Gateway Taskforce will control international gateways that connect Iran to the Internet. This Taskforce, newly created  as part of the Bill’s specifications, in turn will be under the authority of National Centre of Cyberspace (NCC), which is under the direct oversight of the Supreme Leader. The Secure Gateway Taskforce is to be composed of representatives from the General Staff of the Armed Forces, the Intelligence Organization of the Islamic Revolutionary Guards Corps (IRGC Intelligence Organization), the Ministry of Intelligence, the Ministry of Information and Communications Technology (ICT), the Passive Defense Organization, the Police Force, and the office of Prosecutor General.

Delegating such control over Internet and communications access to entities that repeatedly commit serious human rights violations with complete impunity will have chilling effects on the right to freedom of expression in Iran. As documented by human rights organizations, Iran’s security forces, including the Revolutionary Guards and the Ministry of Intelligence, perpetrated gross violations of human rights and crimes under international law, including the unlawful use of lethal force, mass arbitrary detentions, enforced disappearances and torture and other ill-treatment to crush the nationwide protests in 2017, 2018, and November 2019. Alarmingly, passage of the Bill will make Internet shutdowns and online censorship even easier and less transparent. We note that Internet shutdowns not only constitute violations of human rights, such as the right to access information and freedom of expression, but also act as a tool to facilitate the commission and concealment of other gross violations. Indeed, Iran’s deadly repression of nationwide protests in November 2019 took place amid the darkness of a week-long near total Internet shutdown.

In the latest draft of the Bill, all tech companies offering services inside Iran are required to introduce representatives in the country, collaborate with the Islamic Republic of Iran in surveillance and censorship efforts, and pay taxes. They are also required to store “big data and critical information inside Iran” belonging to users inside the country and can face legal penalties if they do not. Access to services provided by companies that do not comply will be throttled and the Committee Charged with Determining Offensive Content (CCDOC) can eventually decide to outright ban them from operating in Iran. Compliance by companies with such requirements will carry severe repercussions for all Internet users in Iran. The Bill therefore places platforms in a position to choose between throttling or complying with regulations that undermine the right to privacy and freedom of expression. Such requirements are meant to further consolidate the National Information Network (NIN), a domestic Internet infrastructure hosted inside Iran. This will place information and communications under the monitoring and censorship of the authorities and may result in Iran’s eventual disconnection from the global Internet. Either foreign services comply and become partially integrated into the national network (at least in terms of data storage) or they refuse, and users will be forced to seek out their alternatives on the NIN. The Bill also introduces new criminal measures against those failing to comply with its terms. Proxy or Virtual Private Network (VPN) service development, reproduction or distribution can result in two years’ imprisonment under Article 20 of the proposed Bill. Article 21 also stipulates Internet Service Providers who allow unlicensed foreign services to access the data of users inside Iran can face up to ten years’ imprisonment.

Domestic and International Backlash Against the Bill

Since the advancement of the Bill, Internet users, along with businesses and guilds representing them, as well as human rights defenders, digital rights activists, international human rights organizations and United Nations experts have raised grave concerns. In October 2021, four UN Special Rapporteurs sent a Communication to the Iranian authorities (OL IRN 29/2021) expressing concerns about the Bill and the lack of transparency that permeated its processing within the parliament and calling for it to be withdrawn. Criticisms of the Bill and parliament’s decisions to proceed with the legislation without any regard for due process have not been limited to civil society actors. As of 23 February 2022, 150 Iranian parliamentarians had signed a letter to parliament’s board of presidents requesting the Bill to be considered and voted on in a general session of parliament rather than in a special committee.

Members of the international community, including the states engaged in bilateral and multilateral negotiations and dialogues with the Islamic Republic of Iran, and the Human Rights Council member states must press Iran to uphold its human rights obligations. Without urgent action, people in Iran will be at even graver risk of isolation and human rights violations.