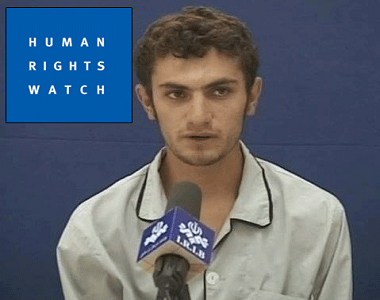 Iran’s Supreme Court affirmed the death sentence for the man, Saman Nasim, in December 2013. His lawyer and family fear that authorities may carry out the sentence in less than two weeks despite an absolute ban on the execution of child offenders in international law. Iranian media reports indicate that Iran has executed at least eight child offenders since 2010. Reports by Amnesty International and other rights groups, however, suggest as many as 31 child offenders may have been executed during that period, making it one of the countries with the world’s highest number of reported child offender executions.

“This is an open-and-shut case since there is no dispute that Saman Nasim was under 18 when security forces arrested him,” said Sarah Leah Whitson, Middle East and North Africa director. “Nasim and his family should have never suffered mental anguish associated with being on death row for months on end, let alone facing imminent hanging.”

Nasim’s lawyer and a source close to the family told Human Rights Watch that they have received information suggesting that the judiciary’s implementation division has cleared the path for Orumiyeh prison, where he is being held, to execute him on or about February 19, 2015. A revolutionary court in Mahabad, in West Azerbaijan province, convicted Nasim of moharebeh, or “enmity against God,” in April 2013 for of his alleged membership in the Kurdish armed opposition group Party For Free Life of Kurdistan (PJAK), and for carrying out armed activities against Iran’s Revolutionary Guards.

Aziz Mojdei, Nasim’s lawyer, told Human Rights Watch that the execution on or around February 19 is “very likely.” He said he has seen an official letter clearing the legal path to his client’s execution on or around February 19 although judiciary officials have repeatedly denied plans to execute his client. Mojdei said officials in the judiciary’s implementation division have unlawfully prevented him from thoroughly reviewing the case file for information about the impending execution even though he is the attorney of record. Human Rights Watch has previously documented cases, particularly for national security crimes such as moharebeh, in which prison officials executed detainees without warning their lawyers or families and refused to deliver the body to the family.

Security forces arrested Nasim on July 17, 2011, after he and several other PJAK members allegedly were involved in a gun battle with Revolutionary Guards in the mountains surrounding Sardasht, a city in West Azerbaijan province. Court documents, which Human Rights Watch reviewed, allege that one Revolutionary Guard member was killed and three injured. Mojdei told Human Rights Watch that forensic experts established that Nasim had not been responsible for the killing, but that he was nonetheless convicted and sentenced to death because he had engaged in armed activities on behalf of PJAK, considered a terrorist group by Iran and several other nations, including the United States.

The source close to Nasim’s family told Human Rights Watch that Nasim spent the first few months after his arrest in incommunicado detention in a facility believed to have been operated by the Intelligence Ministry in Orumiyeh. The source said agents tortured Nasim, including beating and lashing him and pulling out his fingernails. In September 2011, Nasim made a “confession,” filmed and aired on state television, in which he said he shot at Revolutionary Guard members. Court documents reviewed by Human Rights Watch indicate that at his trial Nasim denied that he had shot at anyone during the July 17 clashes.

On November 20, 2014, Nasim and 23 other prisoners in Orumiyeh prison began a hunger strike to protest prison conditions. In response, prison officials threatened to expedite the execution of Nasim and several of the others on death row, Amnesty International said.

The irregularities reported in the trials would violate the fair trial provisions of Article 14 of the International Covenant on Civil and Political Rights, which include the presumption of innocence, adequate time and facilities to prepare one’s defense and to communicate with a lawyer of one’s choosing, and not to be compelled to testify against oneself or to confess guilt. The UN Human Rights Committee has stated that: “In cases of trials leading to the imposition of the death penalty scrupulous respect of the guarantees of fair trial is particularly important.”

“The reported irregularities in Nasim’s trial are only more reason for the judiciary to halt the execution of this child offender and grant him a new and fair trial,” Whitson said. “Inflicting an irreversible punishment is bad enough, but to inflict it on a child offender after an unfair trial is an even greater miscarriage of justice.”

In Iran, 2013 penal code amendments prohibit the execution of child offenders for certain categories of crimes, including drug-related offenses. No prohibition exists, however, for child offenders convicted of murder or haddcrimes – for which punishments are fixed under Iran’s interpretation of Sharia law, including moharebeh. Under article 91 of the amended code, a judge may sentence a boy who is 15 or older or a girl who is 9 or older to death for these crimes if he determines that the child understood the nature and consequences of the crime. The article allows the court to rely on “the opinion of a forensic doctor or other means it deems appropriate” to establish whether a defendant understood the consequences of their actions.

In January 2015, Iran’s judiciary issued a ruling requiring all courts to review death sentences issued for child offenders prior to the 2013 penal code, if defendants and their lawyers petitioned for review. The ruling applied to retribution crimes, including murder. Mojdei, Nasim’s lawyer, told Human Rights Watch that he has petitioned the judiciary and government authorities several times to suspend his client’s execution because he was under 18 at the time of his arrest, but that the petitions were either rejected or not answered.

According to official sources, Iranian authorities executed at least 200 prisoners in 2014, though the real number is thought to be over 700. In 2014 at least eight may have been under 18 at the time of the killings or rapes that led to their death sentences. Human Rights Watch is investigating these cases to determine whether those executed were, in fact, child offenders.

Iran is one of only four countries known to have executed juvenile offenders in the past five years; the others areYemen, Saudi Arabia, and Sudan, as well as Hamas authorities in Gaza. Iran is a state party to the Convention on the Rights of the Child, which bans execution of child offenders. Since 2010, numerous UN rights experts and bodies, including UN experts, the Human Rights Council, and the Human Rights Committee have strongly condemned Iran’s execution of child offenders.

The leadership of PJAK and other armed groups operating in Iran should immediately stop recruiting children, whether for military or non-military purposes, Human Rights Watch said. On June 5, 2014, a Syrian Kurdish military leader announced that the group would stop recruiting children, saying that the armed group would demobilize all fighters under 18 within a month. The internal regulations for the Kurdish police and military forces forbid the use of children under 18.

“Leaders of PJAK and other armed groups operating in Iran should know that they are as responsible for putting the lives of children like Nasim’s in harm’s way,” Whitson said. “There is simply no excuse for allowing children to take part in armed activities on behalf of an opposition group.”